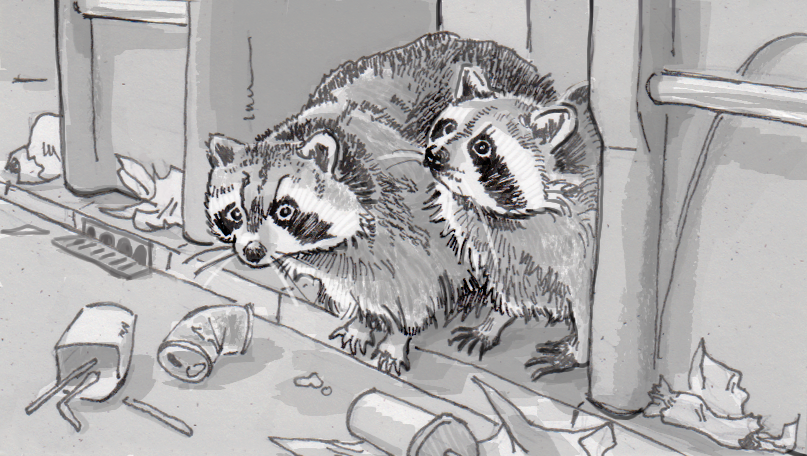 “Maybe we should make raccoon-healthy food and disguise it as cake before we put it in the compost?”

While many raccoons might appreciate my daughter’s idea, I’m guessing that most wildlife specialists would prefer we just feed raccoons less food. After a few more minutes of brain-storming, even my kids realized that stocking compost and trash bins with food tailored to a raccoon’s dietary needs wasn’t really the solution to a growing problem in urban areas: raccoons that feed on our leftovers are getting bigger and fatter on our high-calorie diets, just like we are.

Foraging on our sweet, fatty foods

Wild raccoons should be living on hearty, raw foods like fruit, nuts, eggs, bugs and crayfish. And to be fair, a compost bin is likely to have a decent assortment of those items, albeit with a lot of other processed foods that people tossed out. This essentially makes too many calories too easy for a hungry animal to get a hold of, which would likely lead to increased fight production and other changes in metabolism. To see if human diets were making an impact on raccoons’ health, biologists looked beyond anecdotal reports of ‘fat raccoons‘ and started collecting blood samples for analysis.

Blood samples of three populations of raccoons were compared to see if environmental conditions, specifically access to human leftovers, was making a difference in the animals’ blood sugar levels. As one might expect, rural raccoons had much lower levels of glycated serum proteins (GSP) which are commonly used to monitor glucose levels in diabetics. The elevated blood sugar of urban raccoons suggests that they could easily be at risk of developing diabetes, metabolic disorders, and of course becoming obese. The catch is that most wild raccoons don’t live long enough for these problems to develop thanks to other hazards, like being hit by cars. So unless the raccoons are getting so fat they can’t dodge traffic, they might have no reason to mind a bit of extra french fries and ranch dressing in their diet.

Who benefits from bigger raccoons?

That’s not to say that our high-calorie leftovers aren’t creating a problem though. There’s actually a chance that these calorie-rich foods are boosting raccoons’ size and reproduction rates, which could create more conflict with humans. A larger raccoon with more kits may be more likely to break into our trash, fight with pets, and possibly spread parasites and disease. So even if city-dwelling raccoons don’t mind putting on some extra weight, the people sharing the neighborhood might really want to keep their leftovers to themselves.