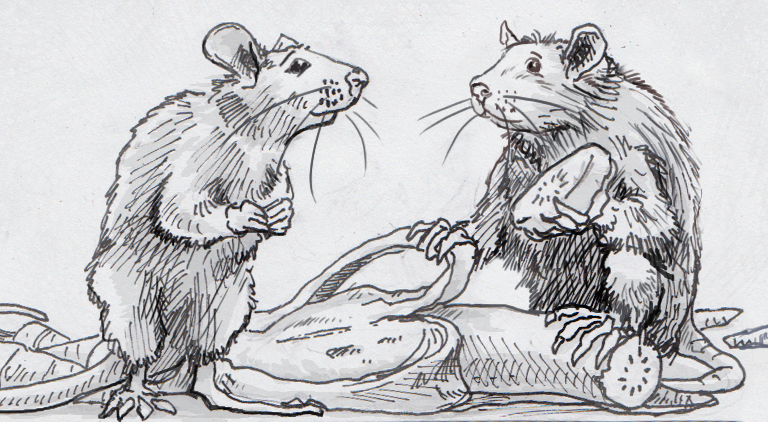 If you had a choice to share food with either my two-year-old, or a captive Norway rat, who do you think would be the most likely to reciprocate? Would there be a chance that one of them would return the favor, maybe well after you shared with them? While my two-year-old’s response to this scenario is questionable (much to the chagrin of his older sister), a study suggests that the rat would likely remember your generosity and respond in kind.

The test scenario involved two rats at a time in view of each other. One could operate levers to deliver either carrots or bananas to their neighbor while receiving neither themselves. Bananas were the preferred treat, and it seems that the rat receiving the snacks noted who was on the other side of the glass helping them out, as when roles were reversed their behavior responded in kind. When a partner was recognized as having been generous with the fruit, the recipient of their lever-pulling was much more likely to offer treats to their previous benefactor (cereal flakes, in this case.) If the first rat had been stingy with the bananas, they were given less cereal by their partner. These exchanges were not immediate, implying the rats remembered and understood previous causes and effects.

It’s easy to inject our own feelings and imagination into this situation and attribute some sort of generosity and goodwill as the rats’ motivation. Couldn’t the rats just be excited to pull the lever because they associated their partner with bananas? Maybe, but rats have been demonstrated to understand that they’re giving food to another rat, not possibly gaining bananas for themselves. Also, unrelated studies have shown rats to identify and possibly empathize with the condition and stressful experiences of their peers, so expecting them to have a basic understanding that their partner would like bananas isn’t a huge stretch.

This fits with a second possible motivation, that they’d like to return the favor in order to extend and reinforce this lucrative relationship. Basically, they see who’s helping them out and want to see that happen in the future, especially if it only costs them a few lever pulls. After all this, my two-year-old declared, that he’s a rat. So sharing with him is looking better and better.

Source: Rats Remember Who's Nice to Them—and Return the Favor by Ralph Martins, Weird and Wild