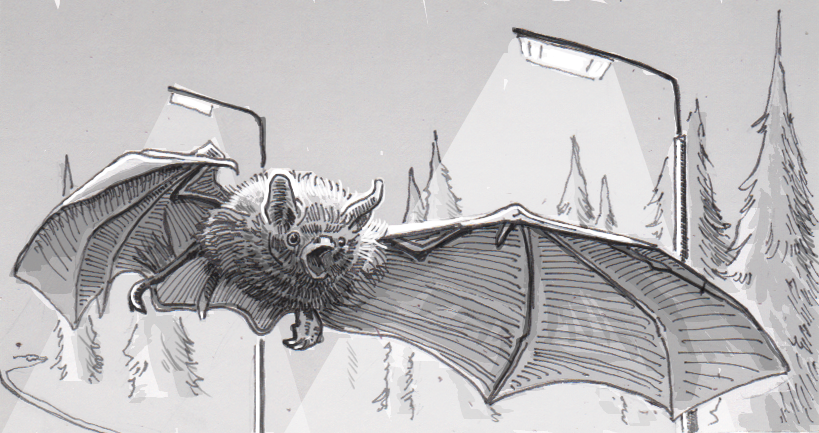 Like other bats that use echolocation to find and catch bugs each night, Natterer’s bats are not blind. While they rely primarily on reflected sound waves to navigate for food, they are also aware of their local light conditions, at least up to a point. Five years of observations have found that these bats don’t see red light, and so to them a red light bulb glowing in the night may as well be complete darkness, which they prefer. This finding has implications for conservation efforts, although it’s complicated by the fact that not all bats have the same opinion on artificial lights brightening up their hunting grounds.

Natterer’s bats (Myotis nattereri) are fast enough to catch insects, but they’re not the fastest bat out there. As such, they seem to be more sensitive to being spotted by predators like owls, and they go out of their way to avoid hunting near bright lights, like street lamps. This study didn’t specifically test the bats’ vision, but there’s a chance that like many mammals, these bats’ eyes don’t sense the color red. If that’s the mechanism at play, light in that part of the visual spectrum would be as visible to bats as ultra-violet light is to us. This allows for an arrangement where people could keep certain areas lit at night while allowing the bats to fly without worrying about being in a spotlight. Fortunately for the bats, this isn’t a false sense of security— nocturnal owls have plenty of contrast-sensing rod cells in their eyes, but generally have so few color-sensing cones that red light is mostly invisible to them as well. They might end up with a bit of an advantage if they can pick up some of the red light’s luminescence, but overall it would be red-sensitive humans getting the best visuals under a red bulb.

If Natterer’s bats might be happier with red street lamps, it wouldn’t be one-size-fits-all solution. Pipistrelle bats (Pipistrellus pipistrellus) are deft aeronauts, and don’t seem to feel in danger under a bright white light. In addition feeling confident about outracing predators, Pipistrelles were found to flock to bright, artificial lighting because it attracted more insects for the bats to eat. Some insects don’t seem to see red, so a bulb putting out only red light might feel like a downgrade for bats expecting their bug buffet to be rounded up under a lamp each night. In the course of this study, red-only light reduced the hunting activity of these bats when compared to white or green lights.

Beyond these two scenarios, a number of bats can mostly ignore artificial lighting. Fruit- and blood-eating bats would probably like to avoid predators, but their diets don’t require them to flit about in the open all night long. Larger species like the serotine bat (Eptesicus serotinus) avoid these interactions altogether, and hunt for bugs at altitudes where owls and lights aren’t really a concern. Even if the effects of light aren’t universal among all bat species, this research still demonstrates how human development can make unexpected impacts on the animals trying to live in our shadows.