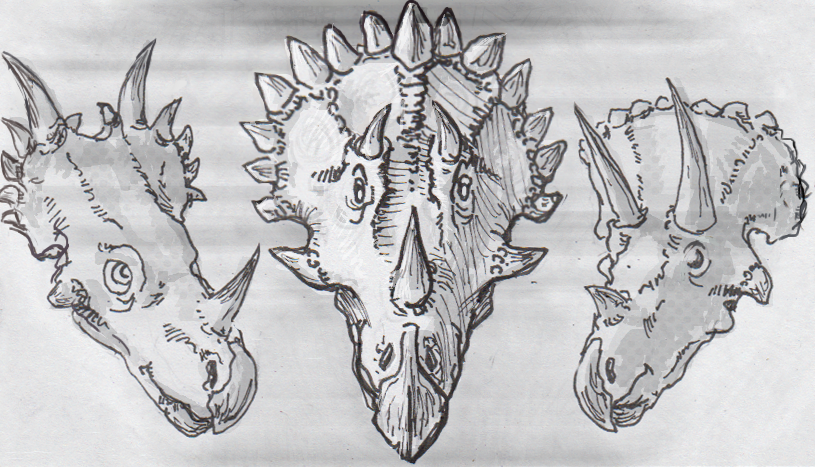 Classifying animals is a strange business. Thanks to things like convergent evolution, wherein similar traits or structures evolve independently multiple times, figuring out who a new animal is related to based on their most obvious anatomy can be misleading. For living things, we’ve sometimes had to make corrections to family trees after comparing species’ DNA. When it comes to an extinct dinosaur, you have to sometimes ignore the flashier bits and pay attention to what seems like minutiae. This is why paleontologists are saying the newly discovered Regaliceratops peterhewsi, despite his centrosaurine styling, was actually from the other side of the family tree as a chasmosaurine dinosaur.

You can probably picture a chasmosaurine dinosaur right now without being familiar with that term. Triceratops, with a relatively smooth frill, large horns over the eyes, and smaller horn over the nose is an excellent reference point for this group. And by each of those traits, the proportional inverse of Regaliceratops. Aside from the small eye horns and large nose horn, the ornamented frill on Regaliceratops was so striking it was the origin of his name, as researchers thought it looked like royalty wearing a jeweled crown.  So why would these two be closely related to each other, when centrosaurines like Styracosaurus bear such a stronger resemblance?

You can’t read a chasmosaurine by its cover

The first concern was timing. Centrosaurines, like the aforementioned Styracosaurus,  were extinct at the time Regaliceratops was alive, and so its relation to them would have required a reshuffling of that family’s timeline.

More importantly, researchers did not rely only on Regaliceratop’s frill and horns for classification, also comparing less obvious anatomy, like the premaxilla. The premaxilla is the bone at the front of the upper jaw that, despite its low profile, is key to identifying dinosaur anatomy, (although it’s wide-spread enough that it’s recognizable in humans too.) In the case of Regaliceratops, the premaxilla was a match for chasmosaurines, not centrosaurines. The assumption is that the premaxilla would have had less evolutionary pressure to change for this species, and would more closely resemble its chasmosaurine ancestors. The horns and frill, on the other hand, may have been in greater flux thanks to how it was used by the dinosaur.

So what was Regaliceratops doing with those tiny horns and impressive frill? Quite possibly just showing off. The horns have some obvious possibilities for personal defense, but they were likely used more as display anatomy for the interest of fellow Regaliceratops in the herd. That utility would have added more immediate pressure for change thanks to its role in mate selection, even if it meant ending up resembling another subfamily. This is not to say that Regaliceratops suddenly came out of nowhere as some sort of anatomical black sheep. The hope is that undiscovered fossils from ancestors bridging the two head-shapes will help show what pushed this dinosaur to differ from its relatives.