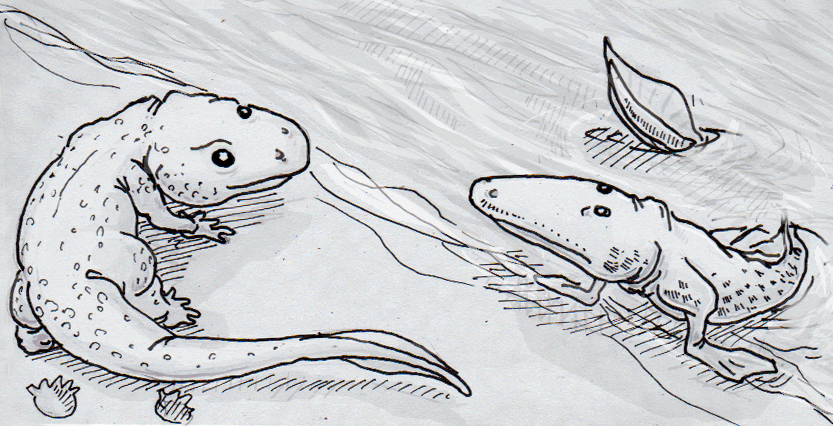 It makes sense to think of evolution as a steady, continuous process. We often talk about “missing links,” implying that there has been a linear, well, lineage, from a starting point to an end point. But this model may bias us too much against other possible scenarios. What if the evolution of say, legs, wasn’t a perfectly smooth gradation, but rather a series of fits and starts, with a flurry of new body types springing up at once? New fossils found in Nova Scotia seem to support the latter model for early tetrapod development.

The previous assumption was that the transition from aquatic, flippered-bodies to four-legged, terrestrial creatures would have been long and even, even though there wasn’t a clear progression of fossils supporting that idea. In fact, a 30-million-year gap in the fossil record was enough of a problem that its even been named “Romer’s gap,” after the paleontologist who first raised the issue. Early, fish-like forms had been found, and so had more advanced walkers, but there weren’t clear links to tie them together.

The finds in Nova Scotia “solve” the gap by basically erasing it. They put the advanced walkers, who we know supported their stomachs and tails thanks to footprints with no drag marks, as living at the same time as the fishy-crawlers. According to this data, they various groups of animals were contemporaries of each other, at least on a paleontological time scale. The idea that one form didn’t replace the other immediately isn’t really that far out there, as we still live with many creatures that are considered “living fossils.” These creatures can still inhabit certain niches, even if they end up with bodies or behaviors that may have been cutting edge at some point, but is no longer a dominant concept.