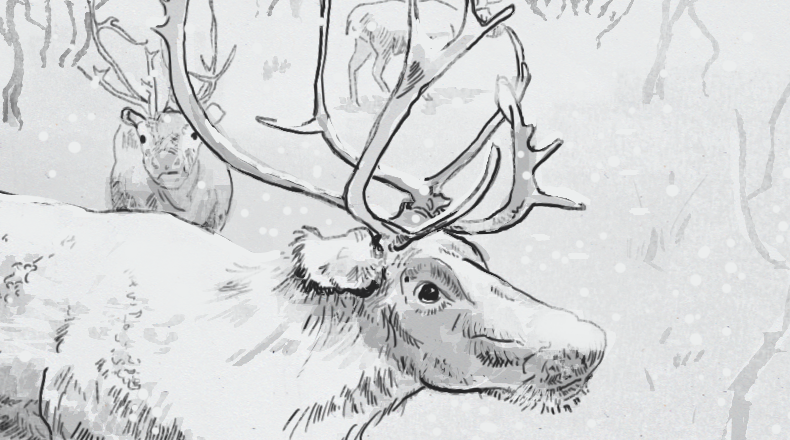 The remarkable heat-regulation of reindeer

If you’re an animal native to places where the winter temperature averages no higher than 30° Fahrenheit, you’ve got to have a solid way to cope with cold. Reindeer, and their Canadian counterparts, caribou, have taken this to heart with a number of interesting adaptations to not only survive the cold, but thrive in it. They’ve actually gotten to be so good at staying cozy in their own skins that they had evolve some countermeasures to avoid overheating (at least as long as the weather keeps things above -40º F (or Celsius!).

Keeping the heat in

Much of the reindeer’s warmth can be attributed to the usual suspects, like insulating fur and body fat, but with upgrades. Reindeer fur actually comes in two layers, with an outer coat of guard hairs helping to trap warm air inside the softer hair against the body. Their fat isn’t just a passive insulator, instead including a lot of heat-producing brown fat, a tissue humans have as babies but lose as we grow up.

Their noses are even more specialized for their environment near the Arctic circle. Rather than simply give up body head when exhaling warmed air in the their frigid surroundings, reindeer noses have special structures to wick the warmth out of their breath before it leaves their nose. So while humans exhale in a puff of warm, moist air that’s visible as steam in cold temperatures, reindeer exhalation is invisible, as its temperature has been lowered to about 69° F by the time it leaves their nose.

Getting the heat out

All this leaves reindeer toasty when chilling in the snow, but puts them at risk of overheating when they need to raise their activity levels. When fleeing wolves (or in some cases, swarms of mosquitoes), they have to rely on other physiological tricks to purposely shed body heat. After testing reindeer on a treadmill, their two main heat-sinks were found to be their tongues and their legs. Their big, wide tongues were employed for panting, much like a dog does to cool down. Their legs were the target of refocused circulation. Since they’re less insulated than the reindeer’s torso, shunting extra blood to the lower extremities lets them dump the unwanted body heat into the surrounding cold air.

Source: Why reindeer noses are more amazing than you think by Lesley Evans Ogden, BBC Earth