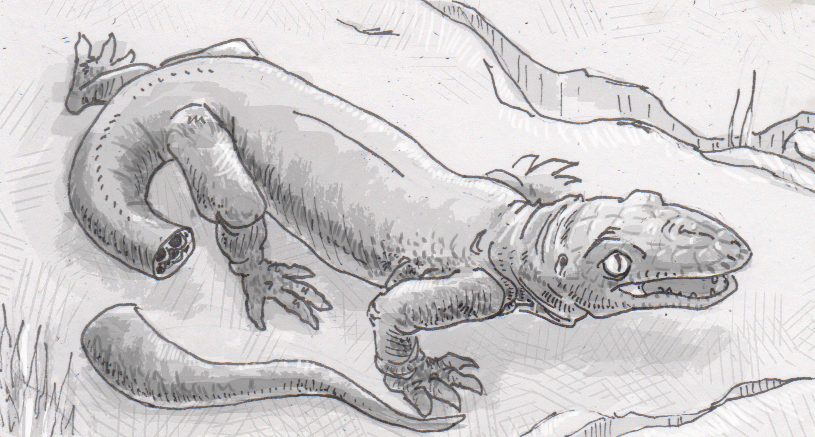 As a general rule, you don’t want cracks in your bones. Then again, you probably don’t want to lose major portions of your anatomy either, and yet lizards apparently love this survival strategy to have had it evolve at least twice in their history. Known as autotomy, this seemingly unpleasant strategy is actually a way that prey animals can stay safe, as their lost tail can confuse or distract a predator long enough for the rest of the lizard (or crab or even mouse!) escape to safety.

Autotomy was thought to have first evolved in Lepidosaurs, or non-crocodile or turtle reptiles, around 70 million years ago. However, fossils indicate that captorhinids, a group of small reptiles from the Permian period 251 million years ago were also dropping their tails to avoid danger. These small omnivores and herbivores weren’t much of a match for larger predators of their time, but they managed to escape being eaten enough to spread across the lost supercontinent of Pangea. Captorhinus and its relatives seem to have been the only reptiles making use of autotomy at the time, and it may have been the critical component that let them dominate their ecological niche. On the other hand, since Captorhinus effectively had a monopoly on autotomy in the Permian period, when they went extinct they apparently took their pre-cracked tails with them.

The cracks in question aren’t the long, skinny fissures you’d imagine in a fractured bone. They look more like small perforations, similar to the holes between paper towels or toilet paper squares. They worked the same way, as they basically created a point where stress on a yanked tail would be concentrated, ensuring the tail would break at exactly that point as cleanly as possible. Since jettisoning one’s tail is such a high-stakes maneuver, modern lizards with this kind of “intravertebral autotomy,” give themselves a bit more control with muscles that can contract to help break the bone. That’s followed-up by muscle contractions around the caudal artery to minimize bleeding. With no soft tissue preserved, we can’t say for sure if captorhinids also had this kind of control with their version of autotomy, but controlling bleeding seems like an useful adaptation in any era.

Many Captorhinus fossils have been found, allowing researchers to see how an individual’s age changed their bones. The intravertebral autotomy-enabling cracks were more pronounced in young animals than in adults, which makes sense since younger lizards would be at greater risk of predation (similar to just about every animal on Earth).

My third-grader asked: Does it hurt to lose a tail? What if it doesn’t tear off right, like when you rip a paper towel wrong?

There’s no information about lizards appearing to be in pain after dropping their tails, which makes sense from the perspective of survival. The animal’s goal is to escape, and being gripped by pain would probably just be a distraction in the critical moment they’re trying to avoid being eaten. That said, not every break is clean— pet owners are advised that if their lizard’s dropped tail is accompanied by heavy or continuous bleeding, something has gone wrong and the animal will need veterinary care.

Even when things go smoothly, caudal autotomy is still a taxing course of action. The lizard will have to invest more energy in healing and growing a new tail, while at the same time suffering from reduced balance, a loss of fat storage and lacking an escape route if a predator attacks too soon.