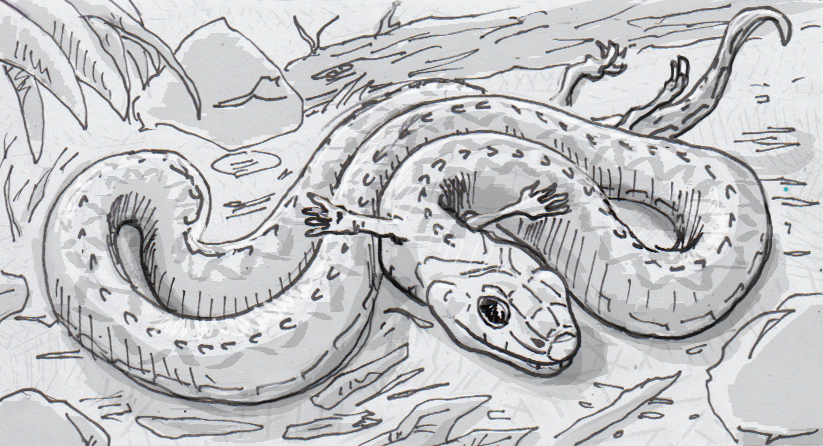 Snakes seem like pretty distinct animals. The shape of a snake is very recognizable, to the point spotting these creatures likely helped shape human vision. However, defining a snake isn’t actually as easy as looking for a long, slithering thing that might bite us. Identification is even harder when you’re looking at a 120 million year old skeleton sporting many snaky traits plus four tiny legs.

The creature in question has been named Tetrapodophis amplectus, the “four-legged hugging snake.” As the name implies, this long, skinny reptile has four small legs. They’re so small that they wouldn’t be much use for usual leg activity, like locomotion. The elongated fingers imply that they were better suited for grasping things, and may have possibly aided the animal in gripping prey or mates. The former would have been a fairly unpleasant grasp, as Tetrapodophis was a carnivore, and like used its long body to constrict around ‘hugged’ prey before eating it with it’s backwards-curved teeth. This particular specimen had one last meal discovered in its gut, complete with small bones that had yet to be digested.

What makes a snake-like reptile a snake?

Aside from the hugging, this animal makes an excellent snake, although that’s still being debated. The line between snakes and lizards can be tricky, especially with examples of legless lizards like the slow-worm. Key details to differentiate the groups include eyelids, ear openings, wide belly scales, forked tongues and tail lengths. As a fossil, Tetrapodophis obviously can’t be compared on all these points, although there are indications of snake-like belly scales and an long body-to-tail ratio. It may still be too early to say this is the missing link between lizards and snakes though, as other legless snakes predate Tetrapodophis. Since evolution doesn’t actually work in a single, straight progression, Tetrapodophis may just be another branch in the family tree, but not the root of our modern snakes, just as tyrannosaurs existed alongside the ancestors of our modern birds without one directly replacing the other.

If Tetrapodophis is confirmed to be a snake, it will shed some light on snake origins though. Most of its adaptions appear to be suited for maneuvering through small holes or burrows, which is one of the leading theories for the origins of modern snakes. This is in opposition to the primary alternative, which is that snakes evolved from a marine reptile like a mosasaur that came back to the land. The lack of a paddle-shaped tail and shortened snout point to a life in the dirt rather than the sea. Once more paleontologists get a chance to examine the original fossil we may have some answers to these questions (and then probably new questions.)