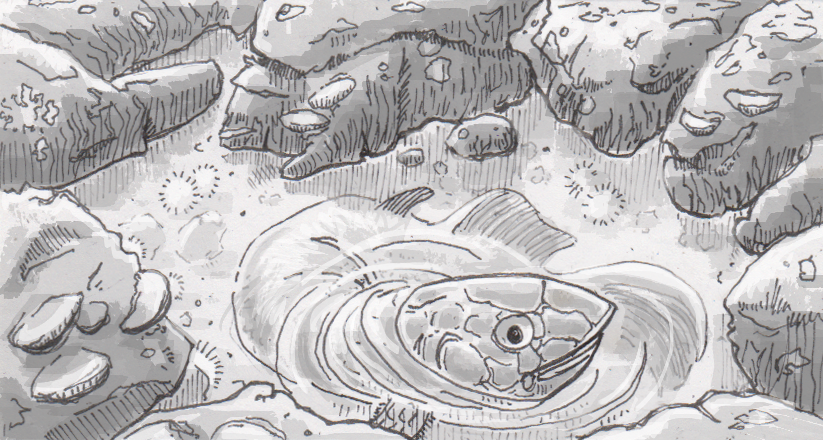 Why would any fish want to leave the water? Life, we’ve been told, is so much better down where it’s wetter, and yet humans and every other land-dwelling animal with a backbone are proof that some of our ancestors were highly motivated to get out of the water. One possible answer to that conundrum is that our ancestors didn’t purposely leave the ocean. Instead, what if they were forced to adapt the land after the ocean kept leaving them?

Limbs to cope with lunar influences

This isn’t to say that the oceans dried up 400 million years ago, requiring fish to quickly grow lungs and legs. However, anyone who’s spent enough time on the beach has seen the temporary version of that scenario take place multiple times per day in the form of tides. As the Moon orbits the Earth, it’s gravitational influence on any particular location changes, significantly changing water levels across the ocean. Those varying water levels then fill and drain tide pools along the shore, which we know demands adaptations from the various animals that live in them. It’s possible then that if those conditions were exaggerated further, fish trapped in shallow tide pools would be forced to deal with being cut off from the larger, safer ocean in a bigger way. Any fish that could cope with this isolation, possibly by dragging themselves across exposed land back to the water, would then increase their chances of survival and reproduction, eventually spawning creatures with increasingly robust limbs.

The advantages of being slightly amphibious make sense, but it may be hard to understand how the tides could sufficiently isolate these species to trigger such pronounced changes in anatomy. The answer to that may be the Moon itself. 400 million years ago, when these transitions were taking place, the Moon was around 10 percent closer to the Earth than it is now, since it’s in the slow process of flying away from our planet. As such, its gravitational influence on the ocean would have been even more pronounced than it is today, making high and low tide dramatically different conditions.

While we can be confident about the math behind the Moon’s distance and gravitational influence on the ancient ocean, it’s harder to test its effect on transitional fish species. With no fish clearly captured mid-crawl in the fossil record, researchers are instead looking for patterns in where transitional fossils are found. The first step was to map where fossils from proto-limbed fish like Melanognathus have been discovered, such as in Europe, Canada and Ireland. Those locations were then compared to maps of the world from 400 million years ago, before plate tectonics shifted all the continents into their current positions. The resulting maps lined up very well, and even predicted that more lobe-finned fish are likely buried in other ex-shores, like Syria and Afghanistan.

This correlation is not definitive though. There are other hypotheses about what pressures pushed sea life onto shore, none of which disprove the other. If more specimens can be found, they’ll hopefully shed more light on the just how big a role being stuck on a beach played in pulling vertebrates out of the ocean.