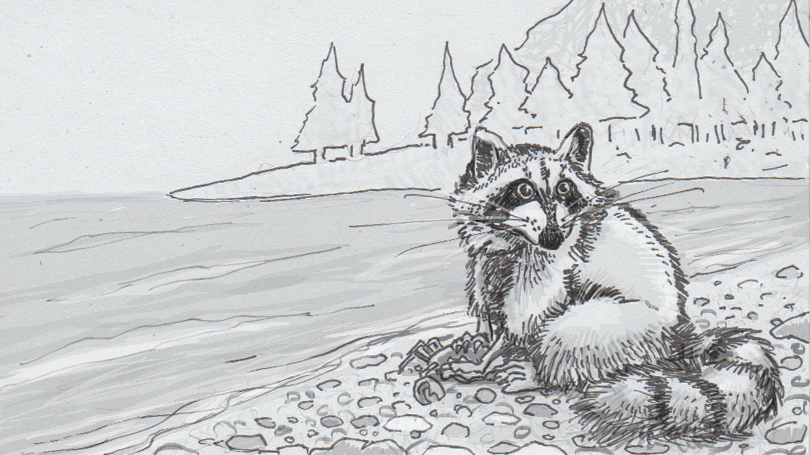 Restricting the range of raccoons with sounds of potential peril

Predators can make an impact on an ecosystem, even when they’re not really there. Animals worried about becoming a predator’s target will shift their behavior patterns, which in turn can lead to larger changes in the local ecosystem. These elements had been established in the past, but a new study based around scaring some Canadian raccoons (Procyon lotor) recently put them all together, and may add to future wildlife management practices.

When the cat’s away, the mice may play, but they might also eat and copulate themselves into disaster. With no predators to help check populations, many prey species have been found to overpopulate and knock their habitats out of balance. The reintroduction of wolves to Yellowstone National Park reduced the number of deer, which opened up foraging opportunities for bears as well as helped trees along rivers, thereby reducing erosion into the rivers. The wolves’ impact reached beyond their physical interactions with deer, which may be tied to the deer’s fear shaping their behavior.

While wolves, cougars and bears once stalked the raccoons along the Gulf Islands, the largest potential threats these days are wild dogs. Fortunately, dogs can be noisy, which allowed researchers to imply their presence without needing to resort to herding actual canines around the island. Recordings of dogs were played near beaches where raccoons were over-eating fish and rock crabs on a regular basis. For comparison, recordings of loud but benign harbor seals and stellar sea lions were played at a different location. The raccoons appreciated the difference, tolerating the noise of the marine mammals while avoiding areas where they heard dogs barking.

The raccoons caution payed off for the animals along the shore. Shore crab populations nearly doubled, red rock crabs increased by 61 percent and some fish populations increased by 81 percent. These changes rippled further out into the local food web, reversing some of the effects that unrestrained raccoons have had on the system. This doesn’t mean that problems arising from overpopulated species can be solved with a set of loudspeakers in the forest, but that top predators do play a key role in maintaining the balance in an area’s ecology, both by their actions and the actions of their would-be prey.