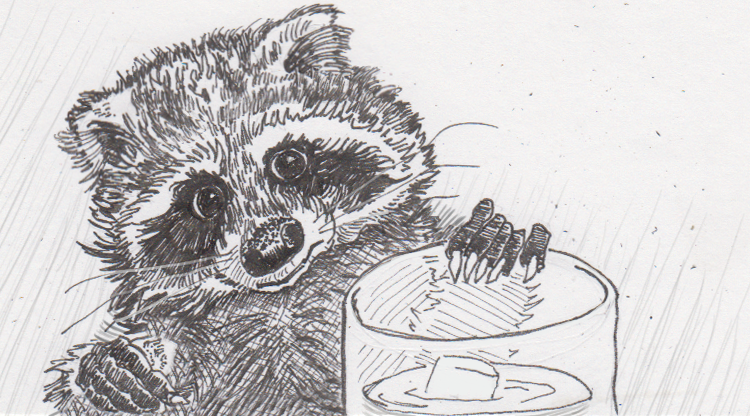 At preschool, my son heard a story about a raccoon that managed to crawl into a full compost bin, then refuse to come out, even when the bin was turned upside-down. It’s an unusual scenario, but in no way a stretch for raccoons, who have reputations for exploring, investigating and manipulating all kinds of objects we’d often prefer they just leave alone. It’s also a reputation that raised expectations about how well raccoons would handle an ‘Aesop’s fable‘ test. After all, even crows, who aren’t known for sneaking through pet doors to access kitchen cupboards, managed to complete the test, although in fairness they’re supposedly the ones that led to its invention in the first place.

The fable, and the resulting test, challenges an animal to gain access to water in a narrow tube, using rocks. In 2014, New Caledonian crows (Corvus moneduloides) figured out that dropping rocks into the tube could displace enough water to raise the water level to the top of the tube. Not every individual crow got it, but those that did seemed to even understand the point of their actions. Rather than just drop things in randomly, they learned to pick bigger, solid objects that would sink, versus smaller, hollow objects that might not move as much water. Like a kindergartner or first grader, the birds must have seen cause and effect well enough to make predictions about which tools would best complete their task.

When eight raccoons (Procyon lotor) were given a similar challenge, they seemed a bit less… focused? Water wasn’t thought to be exciting enough, so the raccoons were baited with a marshmallow floating in the water, which in a way gives a clue about floating versus sinking objects. When stones were left near the tube, the raccoons didn’t see the connection, although to be fair, neither did crows on their first try. Rocks were then placed near the opening the tube, so that the raccoons might bump them and trigger an accidental demonstration of displacing water. Accidents earned four of the eight test participants a marshmallow, but only two seemed to grasp things well enough to then actively pick up rocks on their own.

The the two actively successful raccoons were then challenged again, being given choices about what objects to dunk in the water. Unlike the crows, the raccoons didn’t seem to be assessing the size or weigh of anything. They were interested in all kinds of objects, without any indication that they were trying to be efficient in their activity. Instead, researchers suspect that they were more intent on exploring. Follow-up tests may give raccoons more time to familiarize themselves with the tubes and rocks, as this explorative behavior may just be a sign that the raccoons needed more time to play with everything to learn about it before they were ready to start applying that information to specific challenges.

There was one more twist on this intelligence test, in which one raccoon basically decided to think outside the box entirely. Instead of worrying about water levels, this raccoon spent her energy on figuring out how to knock the whole tube apparatus over, spilling the water and getting the marshmallow in one bold movement. While she technically failed the Aesop fable test, she nonetheless demonstrated some solid problem-solving skills.

Source: Raccoons solve an ancient puzzle, but do they really understand it?, Phys.org