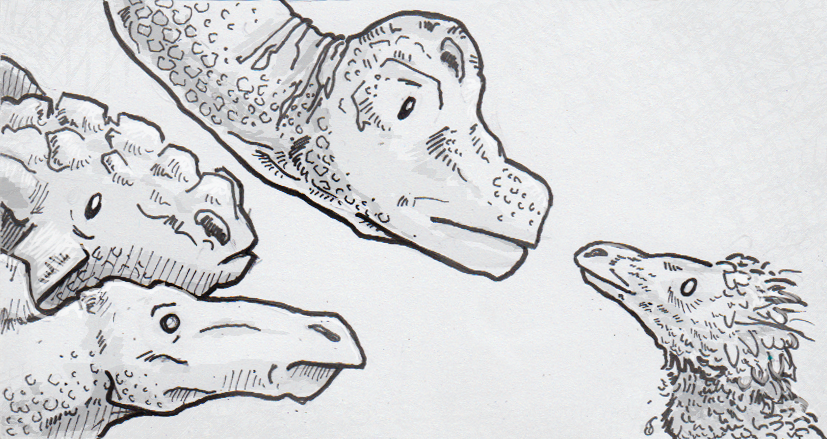 Modern dinosaurs, aka birds, obviously have and depend on feathers. The hunt has then been on to find out when those feathers first evolved, and as we looked, feathers or protofeathers seemed to be popping up all over the archosaur family tree. As more and more species are discovered, more and more outside the direct lineage of birds are turning up with feather-like structures. Even pterosaurs, as non-dinosaurs, had fuzzy structures called pycnofibers. So was everything in the Mesozoic era feathered, quilled or tufted in some way? At this point, the math works out to… no?

One intriguing theory is that the common ancestor of all dinosaurs, the root of the family tree, was feathered (or at least had filaments), and that those genes were then carried on to each and ever descendant. This wouldn’t require all dinosaurs to actually be expressing their proto-feather genes, as creatures like sauropods could have lost them over time (just as whales have lost their hind legs their mammal ancestors had.) Other lineages, like the ornithischians, can then turn up with filaments here and there, while theropods then really went to town with these structures, eventually coming up with sophisticated feathers capable of flight.

However, this new study of 75 species that we have soft tissue impressions of, either scales, feathers, or a mix of both, points in a different direction. Statistical analysis found that feathers were likely not part of the original dinosaur ancestors, and that the feathers, filaments, etc. all evolved separately. The feathery structures would then be a case of repeated convergent evolution, where similar structures were discretely evolved because it was a successful match for a particular need. In the case of feathers, a need for warmth was possibly solved multiple times by insulating fuzz (and again if you want to include mammal hair in a broader definition of fuzz). Courting displays were enhanced with colorful filaments of different sorts in different species. The one evolutionary pressure we’re confident was not the source of feathers was actually flight, as there’s clearer build-up in the fossil record to the first flight feathers in theropods.

So does this validate the featherless creatures in some popular media? No, especially with movies’ reliance on carnivorous theropods for scares, who still had the highest likelyhood of sporting some fuzz.

Source: Most dinosaurs had scales, not feathers, fossil analysis concludes by Ian Sample, The Gaurdian