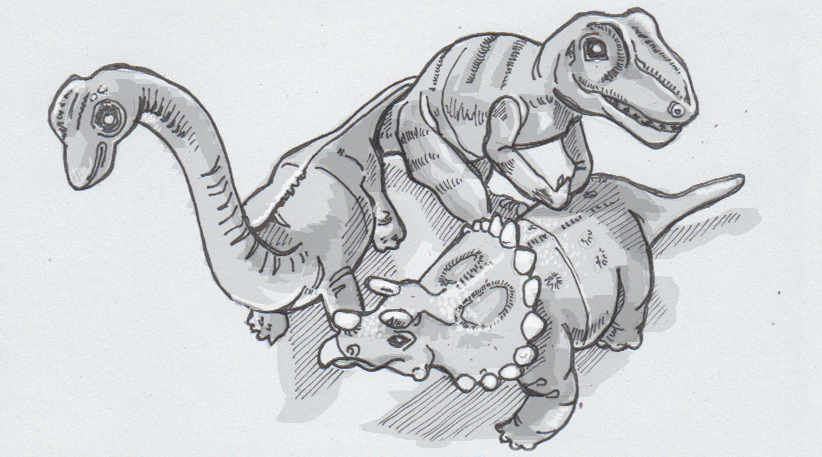 For the past hundred years, there’s a solid chance we’ve misunderstood a lot of dinosaurs. It’s nothing concerning being warm- or cold-blooded, or having feathers, or any of that. Instead, questions have been raised about the overarching, dinosaur family tree. There’s a plausible chance that we’ve been been quite wrong about who was related to who— so much so, that it was time to pull out my kids’ toys to make sense of it all.

Pulling toys out at bedtime was confusing to my two kids, but the visual aids seemed like the easiest way to show how dinosaur taxonomy was getting reshuffled. We started with the groupings that have been around for the last century, splitting the toys into the saurichians and the ornithischians, plus a pterosaur sitting to the side for later on. Maybe it was somewhat telling, but this traditional grouping didn’t immediately make sense to my kids. They didn’t see any pattern that would pair long-necked sauropods like Brachiosaurus to a predatory theropod like Tyrannosaurus rex into the saurichian group. On the ornithischians side of things, stegosaurus looked a little closer to a triceratops, but the presence of an Iguanodon kind of confused things. My second-grader only ‘got it’ when we looked at a couple of toy skeletons to compare hip bones, since that is the basis for these arrangements.

Saurichians are also known as ‘lizard hipped’ dinosaurs, because their hip bones resemble those found in modern lizards. If you’re not up on your lizard anatomy, look for a pronounced pubis bone facing forward. Somewhat confusingly, theropods have a ‘lizard’ hip, even though they’ve since gone on to become modern birds. This is only a labeling issue, as ornithischians are supposed to be ‘bird hipped,’ based on a resemblance to modern birds anatomy. These references were picked before the connection between theropods and birds was really understood, and if the new family tree holds up, it will seem much less relevant in the future.

Having seen the clear similarities in hip bones, my kids were appropriately baffled again when I started rearranging their toys to match the proposed revisions. Theropods like T. rex, a featherless dromaeosaur, and a Spinosaurus were all moved next to the ornithischians, leaving our only Brachiosaurus toy to sit by itself. If we had one, it could have sat next to a very theropod-like Herrerasaurid like Chindesaurus, but our toy collection isn’t quite that expansive. With this new arrangement, my second grader diligently started hunting for similarities between her T. rex and Triceratops toys in the newly expanded ornithoscelidans, but between the lack of accurate detail in the toys and somewhat obscure anatomical markers underlying this new classification, she wasn’t going to get far.

Instead of looking at the obvious shape of a hip bone, this reorganization is based on numerous smaller features, many of which were compared by detailed measurements and computer-assisted comparisons. The defining anatomy that ties ornithoscelidans together is a bit more subtle than a pronounced pubis, focusing on things like skull shape, hind legs or ankle bones. My kids’ outdated toys also obscured one feature that may actually be simplified in this family tree, which is feathers. All the dinosaurs with confirmed feathering would be bundled together on the ornithoscelidan side of the family tree. This would allow for a feathers to have evolved later than previously believed, but it would also raise questions about where pterosaurs (still sitting off to the side of our toy pile) got their pycnofibers from. If feathers are indeed a trait of the new ornithoscelidans, then the fuzz on pterosaurs must have evolved independently, rather than from a shared ancestor.

Not conclusive, but not crazy

There’s still a fair number of questions concerning this new history for dinosaurs. As thorough as the research behind the hypothesis was, more study and sampling is needed before it can really be adopted for the next hundred years of paleontology. However the dinosaur family tree ends up, it’s a great example of a more indelible feature of scientific study— when new evidence is available, new models can replace the old. Even if every book we’ve ever read told us theropods and sauropods were close kin, we shouldn’t be limited by that sense of familiarity. While these animals have all be dead for millions of years, our understanding of them is still a lively and dynamic process, even more so when you’re explaining things with toys.

Source: A 130-Year-Old Fact About Dinosaurs Might Be Wrong by Ed Yong, The Atlantic