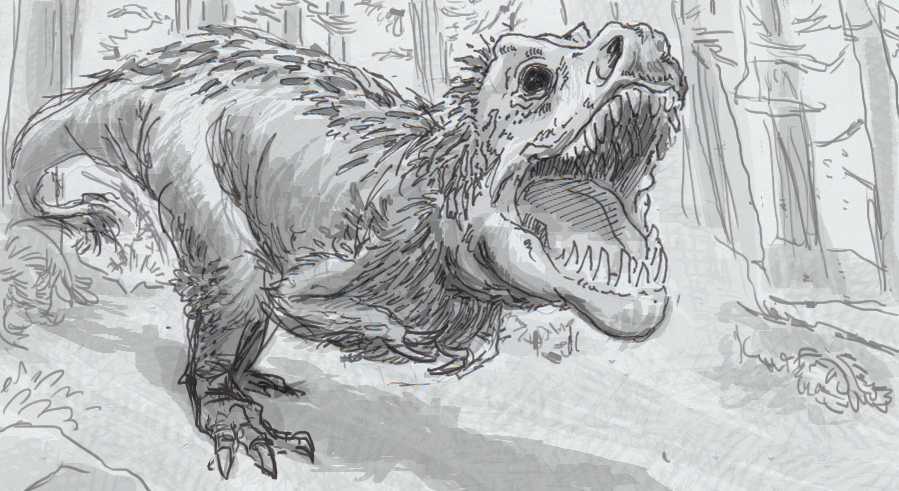 It’s weird, but Tyrannosaurus rex kind of came out of nowhere. The 40-foot-long, nearly 8-ton celebrity predator of the Cretaceous seemed to show up and abruptly dominate its ecosystem, at least according to the fossil record. Before T. rex, other tyrannosaurs were known to live in Laramidia (now the western portions of North America), but there’s been a gap in our data spanning 20 million years, and it’s hard to explain the lineage from these smaller species to our favorite tyrant king. A recent reexamination of the data we do have has some new suggestions for the tyrannosaur family tree, including a new point of origin for North America’s premier theropod.

Tyrannosaurs existed well before the Cretaceous period, and thanks to the breakup of Pangaea 200 million years ago, were scattered around the world. Isolated from each other, each part of the family developed their own traits and specializations adapted to suit their environments. Researchers from Carthage College then analyzed all these variations in the tyrannosaur family tree, looking not only at geography and chronology, but also similarities in each species’ anatomy. The family tree could then be sorted for the minimal number of evolutionary changes between each species. What might have previously been thought of as a leap in say, tooth size, before would now hopefully fit more gracefully among more closely related kin.

The big “missing link” that was uncovered in this tyrannosaur family tree was Tarbosaurus. Tarbosaurus is so similar to T. rex that it’s sometimes been called Tyrannosaurs bataar. It’s not a new species, having been discovered in Mongolia in 1946. The novelty here is a reconsideration of geography’s role in shaping Laramidia’s ecosystem. Arranged for anatomical affinity, the study found a number of species in Asia and Laramida that strongly resembled each other. It’s thought that these theropods were crossing on temporary land bridges between the two continents, much like humans did 20,000 years ago. T. rex‘s impeccable resemblance to Tarbosaurus then makes a lot more sense, leaving the smaller theropods living in Laramidia less explaining to do.

There goes the neighborhood

This is convenient, because the fossil record suggests that those tyrannosaurs didn’t have much time to work with. When T. rex arrived, it seems to have quickly dominated its niche as the ecosystem’s apex predator. Showing up on western shores a stronger bite and larger body than native predators, it may have had a big advantage and climbed to the top of the food web, not unlike an invasive species. From the local prey’s perspective, this must have been very difficult, because if being hunted by a hungry theropod is bad, suddenly being hunted by a super-sized theropod from Asia is like something out of a monster movie. Just without the radiation breath.

Source: The evolution of tyrannosaurs by Jon Tennant, PLOS Paleo