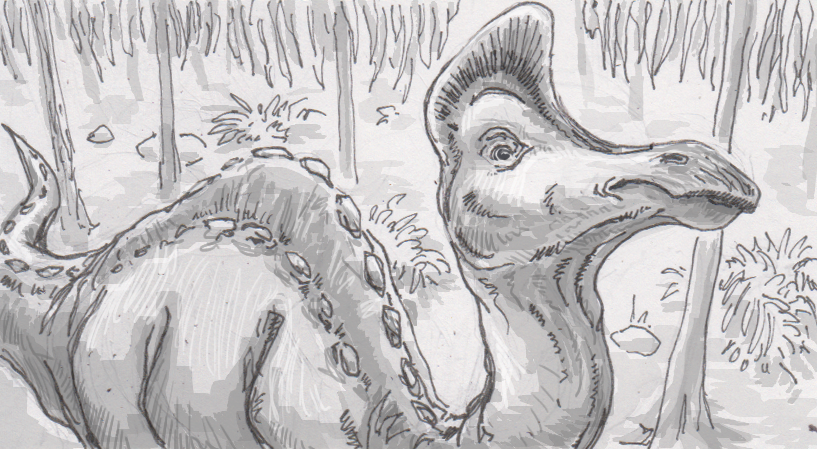 Reunited with its skull after 100 years, a Corythusaurus skeleton is finally complete

Paleontologists have a difficult job that is sometimes made harder by other paleontologists. As if the range of conditions necessary to bury, fossilize and safely expose an ancient dinosaur bone weren’t narrow enough, researchers today are increasingly having to deal with the bad habits of fossil hunters from previous generations. Combined with a lack of field notes from excavation sites, the practice of ‘head hunting’ has left many skeletons without key, identifying features, like their heads. Fortunately, this practice is somewhat reversible, and researchers in Alberta Canada believe they may have reunited a Corythosaurus skull with it’s body after 100 years of separation.

Head hunting is a pretty descriptive term in this case, although in practice fossil hunters were also happy to target other flashy anatomy, like claws or tail spines. Once their prized bone was extracted, the rest of the skeleton was left behind, such as with the skull found by George Sternberg in 1920 that would eventually go on to be named a new species, Corythosaurus excavatus. Having the whole skeleton of a holotype, or the model specimen for that particular species, has a lot of scientific value, of course, but at the time it wasn’t always thought to be worth the effort to dig out of the ground. In the case of hadrosaurs like Corythosaurus, even today some paleontologists find their bodies to be generic enough to be of less interest than their flashy, crested heads. Still, leaving headless bodies for other scientists obviously isn’t ideal, as it’s likely to cause unnecessary confusion at best.

New leads from an old newspaper

In the 1990s, a headless hadrosaur body was found in the Dinosaur Provincial Park, mostly left in the ground for people to see fossils in their ‘natural habitat’ of rock and earth. However, thanks to natural erosion, archaeological evidence was revealed at that site that helped identify the skulless skeleton. Bits of plaster and newspaper clippings were found that were dated from 1920, and it was determined that Sternberg’s Corythosaurus was the only fossil excavated at that time and location. Putting together these pieces, scientists felt that they had finally identified the half-buried beast.

While the circumstantial evidence was impressive, research was conducted on the now-fully excavated skeleton, the original skull and some pieces of the lower jaw that were removed separately at an earlier date. It was important to know if these pieces could have actually fit together into a single animal, and while the legs were a little bigger than anyone would have guessed, they were within the range of individual variation for a slightly taller dinosaur. Aside from reuniting this particular dinosaur with its head, this research helps lay out methods to piece together other victims of head hunting. The researchers also noted that a secondary technique would be to look at isotopes in soil samples to see if two fossils had the same point of origin, although that may not always be possible depending on how the samples were preserved.

Source: Headless dinosaur reunited with its skull, one century later by Katie Willis, University of Alberta