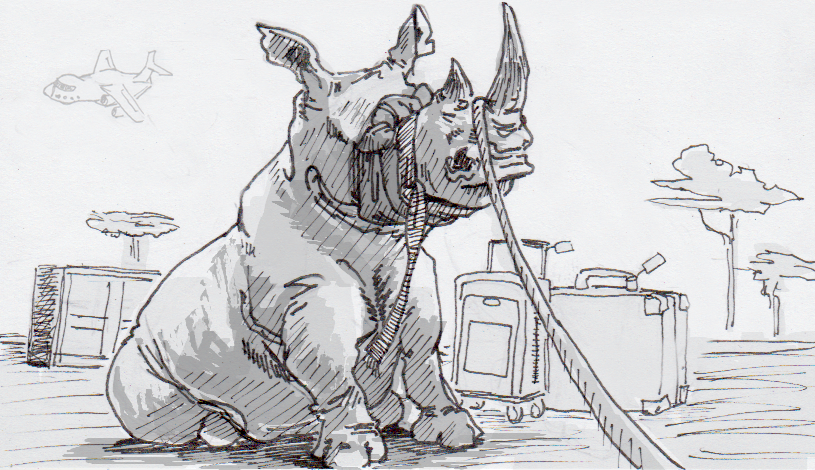 Relocating animals isn’t easy, especially if they’re as large and potentially dangerous as an adult white rhino. Despite the risk and $45,000 per rhino cost, a group called Rhinos Without Borders has been airlifting rhinos to new homes in Africa, hopefully away from the poachers that are on track to drive the threatened species, like the black rhino, to extinction.

How to ready a rhino for the big trip

Rhinos aren’t the first animal to be airlifted to new homes, but they’re certainly one of the more difficult species to move this way. Before they’re moved, they’re monitored to see if their herd’s growth is being limited by the amount of space and resources currently available, or if they’re in particular danger from poachers. Animals are then selected, sedated, blindfolded then woken up so that they can be walked into a cage. They’re then cared for and kept in quarantine for for six weeks so that disease isn’t accidentally spread to their new home. They’re also implanted with microchips in their body and horns, so that conservationists can be alerted to poaching activity as quickly as possible.

Once the rhinos are prepared and judged fit to move, they’re again sedated then  loaded into commercial cargo planes, ensuring shorter and less vulnerable travel than ground transport. They’re flown to their new home where they will hopefully start staking out their new territory by pooping on it. Conservationists take care to relocate rhinos to areas without other rhino herds to avoid creating conflict with the new neighbors.

Worth more than the weight of their horns

Rhinos Without Borders is ramping up for its biggest airlift yet, aiming to move 100 rhinos as soon as possible. The goal is to get the rhinos away from poachers, who hunt the animals in order to sell their horns in China and Vietnam. Despite bans, no proven medical value, and some preserves with “shoot to kill” orders, poachers are still willing to kill an estimated 1000 rhinos a year for the money horns sell for on the black market.

In addition to a more secure environment for the rhinos, there is hope that their new homes, like preserves in Botswana, will benefit from eco-tourism as well. That way the safety of the rhinos will be woven into the local economy, providing further incentive to keep the rhinos’ horns on their own heads. To help get the rhinos to their new home, you can contribute to Rhinos Without Borders here.

My kindergartner said: When asked what she thought the purpose of a quarantine period might be, she guessed that the rhinos needed time to forget their old herd before moving near a new one. Basically, she looked at it as a time for a social/emotional quarantine, although the pathogen explanation made sense to her too.