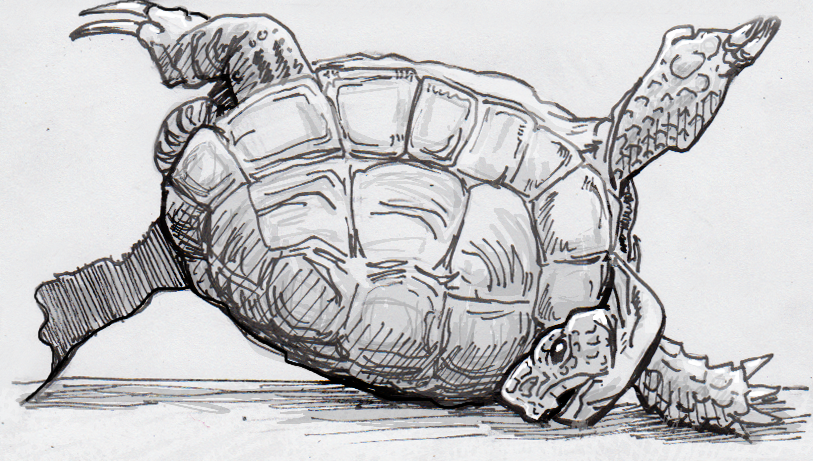 Risk, reward and why there is no perfect tortoise shell

While people often assume that evolution is pushing organisms to continually become “better,” there’s not actually a single goal to aim for. While some creatures have evolved amazing solutions to their specific environmental niche, there’s usually a tension between those specializations and the new risks they create. A great example of this idea are tortoises, who’s shell can keep them safe until they’re flipped over, at which point that protection can end up costing them their life.

Tests were conducted on 118 Hermann’s tortoises (Testudo hermanni) to see how well they could right themselves after being flipped onto their backs. Researchers measured not only the time it took to recover, but also the exact shapes and proportions of the animals’ hard shells. Sex and body temperatures were also compared, so physiological factors would be accounted for in case they out-weighed the effects of the shell shapes. Patterns in these body types might then reveal what pressures helped shape the reptiles’ shells in their evolution.

On the most basic level, the answer to being flipped upside-down is to have a more rounded shell, which allows the tortoise to rock and roll more easily. Beyond that, some interesting trends became apparent based around the animals’ size and sex. Larger tortoises generally had a harder time righting themselves, but females are usually larger than males, and males come in a spectrum of sizes still. While there was clear risk in being too large to flip over, there must also be some advantages to being bigger to keep those genes going.

For the female tortoises, being larger likely helps in egg production. More eggs can be laid by larger females, and so the additional offspring must outweigh the dangers posed by being flipped and immobilized. For the males, smaller males are usually speedier and more maneuverable, making them the most likely to get back on their feet. However, they need that trick more than all their peers, since larger males who are competing with other males for mates are less likely to be flipped in the first place. While the risk of being flipped would likely be devastating for these larger males, it must happen infrequently enough to give a fighting chance to the bigger tortoises.

So if there is a perfect solution here, it may be still be a work in progress. Given enough time, will more tortoises be bigger? Smaller? Or just have amazingly round shells to avoid getting stuck on?