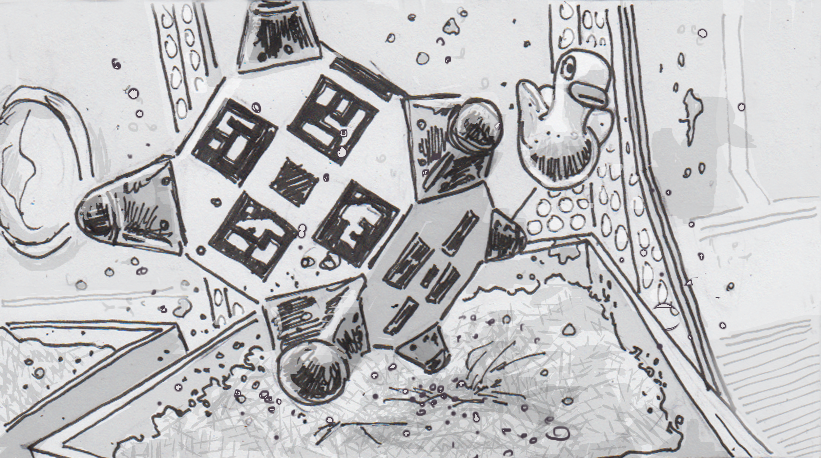 Robot to explore asteroids by rocking, rolling, twisting and tumbling

The Curiosity Mars Rover is a six-wheeled vehicle weighing over 8,000 pounds (on Earth). It’s carries a multitude of scientific instruments and is capable of traversing over 29-inch obstacles. It’s been a huge success, and yet it’s not a design being considered for future exploration of asteroids or comets. The design just wouldn’t fly, mainly because it might do just that. On a smaller body like a comet, the rover would only way a few pounds, and so spinning the tires might just launch the rover off the ground, flipping it over and ending the mission. So instead, designers are looking to lose the tires and start thinking about a box.

Wheels on the inside

Teams at NASA’s Jet Propulsion Laboratory, Stanford University and the Massachusetts Institute of Technology have been collaborating on an unusual prototype for future low-gravity exploration. The robot, dubbed “Hedgehog,” is basically a cube with stubby prongs sticking off each corner. The prongs may be fitted with probes for research, but their primary purpose is to provide traction and leverage points for when Hedgehog needs to reposition itself, either autonomously or by remote control.

Movement may seem like a weird specialty for a box with no external moving parts, but Hedgehog has some impressive maneuvers for getting around. Inside the cube are three flywheels, positioned along three different planes. To move, a wheel is spun up to a high speed, then stopped with a brake to transfer momentum, knocking the robot over in a specific direction. Hedgehog therefore moves in sort of a tumbling manner, but being a symmetrical cube means that that’s not a problem— there’s no way to land upside-down when there’s no top to begin with.

This system of movement allows for both subtle adjustments and dramatic stunts. A fully loaded Hedgehog probably wouldn’t weigh more than 20 pounds on Earth, so it would need to be able to make smaller movements in low-gravity locations to avoid accidentally launching itself too far. However, if the robot did need to make a larger movement, such as escaping a sandy hole, researchers have invented a “tornado” movement, wherein it spins itself up and out of viscous particulate.

Hedgehog is in phase II of development, having recently performed well in NASA’s Vomit Comet. The Vomit Comet is a special C-9 airplane, used to simulate microgravity for short periods of time, and Hedgehog proved that it could successfully maneuver in such environments. Hopes are high, especially since this compact, self-contained design brings other benefits, such as minimizing exposure of sensitive equipment to hazards as well as being easy to pack in future missions’ cargo space (or maybe under my Christmas tree?)