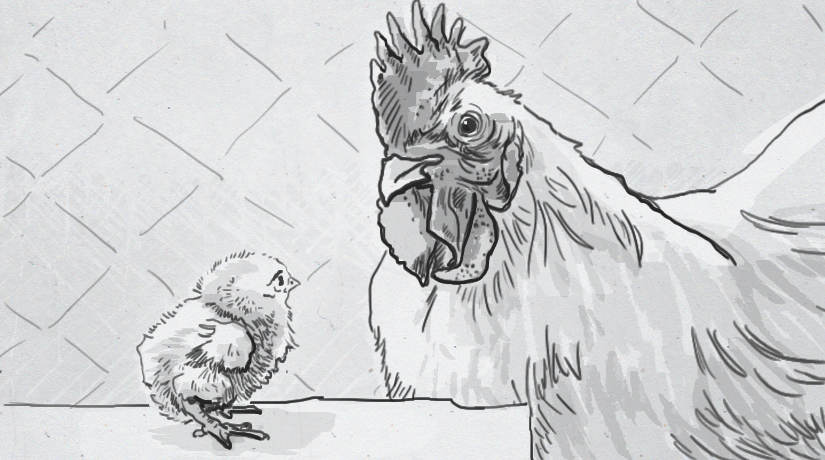 While it’s always been considered a bit of a surprise if a baby would inherit its mother’s eyes, or its father’s dimples, we’ve been fairly confident in the idea that everyone gets their mom’s mitochondria. Mitochondria, organelles in your cells responsible for providing them with energy, are made according to their own packet of DNA, called mitochondrial DNA (mtDNA). This is distinct from your body’s nuclear DNA, and since it was thought to only be heritable from an animal’s mother, had smaller degrees of variation between generations. This made it an attractive tool for tracking populations and familial lineage, but that may soon be complicated thanks to some persistent genes from a particular rooster.

A family of White Plymouth Rock chickens was recently found to be breaking the rules, with genes from roosters’ mtDNA turning up in their offspring. This was determined thanks to a mutation in the ND4L gene was found to have originated in a rooster after it was found turning up in his chicks mitochondria. This isn’t the first time this has happened, as plants, sheep and one human have been documented with similar genetic activity, but the relatively small number of chickens required to uncover it has raised eyebrows about how common this kind of activity may be in the wild.

Lost in the shuffle

In mammals, the mechanism that prevents a father’s mtDNA from being passed is fairly clear. When sperm fertilize an egg, the sperm’s mitochondria are usually destroyed. Even though the nuclear DNA can still be shared to recombine into a new embryo, the mtDNA is basically removed from the equation, leaving the mother’s mitochondria as the only possible donors of genetic information.

If this reliable mechanism isn’t actually so iron clad, it may impact a variety of studies. Anthropologists have used mtDNA to trace family backgrounds, as well as large scale historical migrations. Outside of science, mtDNA has been deemed reliable enough to be entered as evidence in criminal trials. Unexpected rooster genes don’t throw all this out the window, but they do indicate that some closer reviews of how often fathers contribute to mtDNA be conducted so that future research can account for such variability.