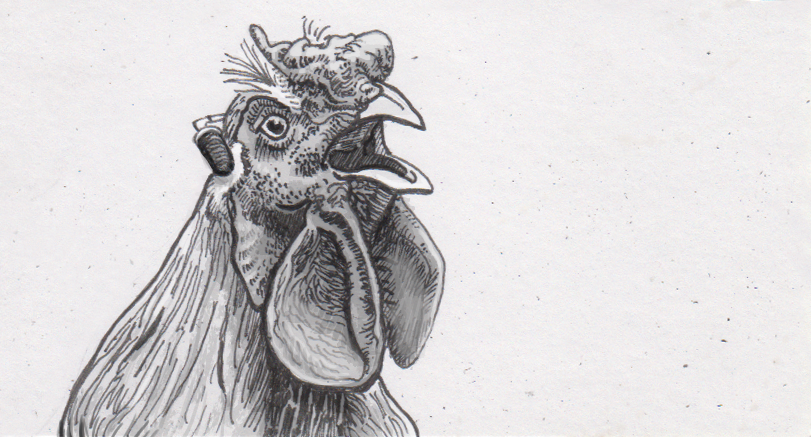 Rooster’s skulls automatically cover their ears when they crow

Some animals establish dominance with size alone. Others sprout elaborate, bony growths from their heads to smash against their rivals. Roosters have developed a more obnoxious display of their personal prowess, crowing before sunrise every day to tell everyone within earshot where their territory starts and ends. While the timing of this announcement makes it unpleasant enough, roosters can actually crow loud enough to permanently damage your ears. This has led them to have to evolve defenses against their own voices, since it seems that roosters don’t want to hear themselves any more than the rest of us do.

A pleasant morning sound, like a percolating coffee maker, is only around 55 decibels. Human voices are usually between 60 to 70 decibels, and bad alarm clock is likely to be around 80. However, roosters can eclipse all these sounds, eclipsing even the volume of a police siren. To get a specific measurement, researchers attached microphones to roosters’ ears, and found that the birds crow between 100 to 143 decibels. While 100 decibels is manageable, anything over 120 decibels creates enough air pressure to damage one’s hearing. Since roosters aren’t commonly deaf themselves, researchers then investigated their anatomy to see how they survived their own sounds.

The trick is that a rooster will never hear itself at full volume. Micro-CT scans of their ear and other skull anatomy found that when their beaks open to crow, their ear canals are mechanically protected. 25 percent of the ear canal is closed when the bird’s beak is wide open, and soft tissues end up closing another 50 percent of the eardrum. So instead of getting a full dose of their own voice, a crowing rooster only hears a portion of their own output.

Safer away from the sound’s source

Other chickens in the area are protected from hearing loss primary thanks to how sound travels across distances. The media and geometry of an area make a huge difference in how far a sound will travel, which has driven different species of birds to specialize in higher or lower sounds. For instance, a loud, low-pitched hum will be audible in dense foliage at a greater distance than higher-pitched tweets. In the case of roosters, even open air causes a fair amount of drop-off, reducing a 120-decibel crow to only 100 decibels just a few feet away. So even without mechanically blocking their ear drums, hens aren’t likely to be literally deafened each morning by a rooster’s crow.

If that weren’t enough protection, the hens also have a better chance to recover from hearing loss than humans do. The inner hair cells that get destroyed when exposed to sounds over 120 decibels heal regenerate faster in birds, ensuring they never miss a chance to be woken up by a rooster’s ear-splitting crowing.

Source: Roosters Have Special Ears So They Don’t Crow Themselves To Deaf by Christie Wilcox, Science Sushi