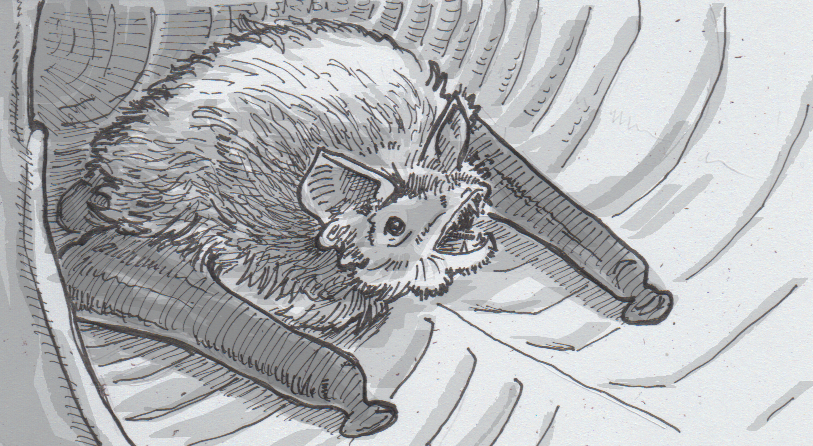 Roosting in conical leaves reduces the clarity of bat communications

Spix’s disk-winged bats don’t live the standard cave-bound lifestyle we usually associate with flying mammals. The natives of Central and South America generally roost in the thick, curled leaves of plants like calatheas. Weighting in at only four grams, a handful of bats can hide in a single furled leaf, hanging on thanks to the suction-cup disks on their wings and legs that they’re named for. It’s a good system, but the trade off of the cozy, protective leaves seems to be that the bats in the leaves have a very hard time keeping track of what’s happening in the world around them, particularly with their fellow bats.

Aside from the echolocation insectivorous bats are famous for, bats also vocalize to communicate with each other. Researchers observing some Spix’s disk-winged bats (Thyroptera tricolor) noted that individuals roosting in leaves seemed to be having a hard time keeping up with these conversations though. Even as familiar bats in flight would call out, the bats roosting in leaves would “answer” indiscriminately to both friends and strangers, as if they weren’t sure what they were hearing.

Researchers suspected that the thick, cone-shaped leaves might be somehow affecting the acoustics around the roosting bats. To test this, they played recordings of bat calls while placing microphones at different positions in a curled leaf. They found that, even though the bats were roosting head-up, towards the opening of the leaf, the tube made hearing the specific sounds from outside the leaf very difficult. Sound was transmitted, and even amplified, but it was distorted enough that roosting listeners probably couldn’t make out what their brethren flying in the jungle were trying to say.

However, when the roosting bats would call out a reply to what they’d thought they heard, the result was much clearer for their audience in the air. The curled leaves again amplified the sound, but it didn’t distort it enough to confuse nearby listeners. Partially thanks to the complex specificity of the reply calls, flying bats seemed to have no problem identifying which leaves their friends and family were in. While only fostering one-way communication, the leaves seem to get the signal out for bats looking for a place to roost, even if they end up surprising their neighbors when they finally come in for a landing.

Source: Bats Use Rolled-Up Leaves as “Trumpets” by Ker Than, National Geographic