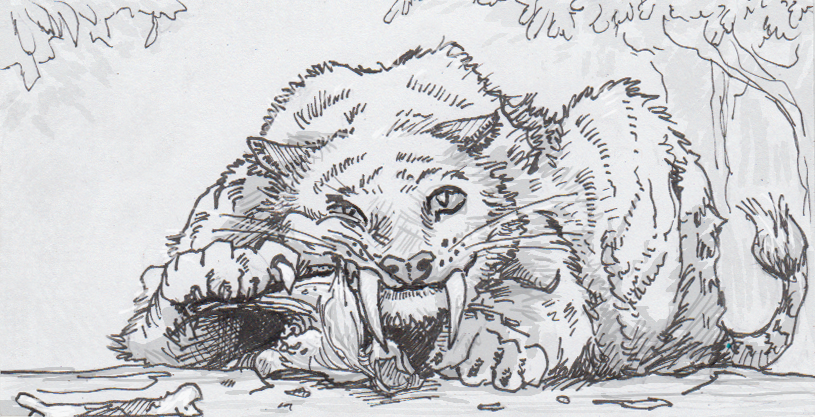 Saber-teeth were great for catching food, but not so useful for eating it

When you want to eat of something, you don’t think much about putting the food into the front of your mouth to take a bite.  Your jaw opens wide enough that there’s plenty of room for food to pass between your incisor and canine teeth. Now, if your canines were longer, like a megantereon’s, and could not fit in your closed mouth, taking a bite might be a bit more difficult. Those over-sized chompers might help you catch prey, but would they block it from actually being eaten?

One hypothesis about eating with extra-long teeth is that the cat’s mouth opened extra wide, thanks to less cheek tissue to hold it in place. That way, the jaw would theoretically have more freedom to swing open, allowing a big enough opening that the canine teeth could help sliced and tear the flesh to be consumed. While an early saber-toothed cat like megantereon would have less of a stretch to make with less pronounced teeth, later relatives like smilodon would have had to nearly unhinge their jaw to make space for 11 inch teeth. That kind of stretch isn’t supported by the points of attachment for jaw and cheek muscles, specifically the masseter muscle.

A model in modern big cats

Instead, this group of Pliocene cats may have eaten more like big cats today. While a lion can open the front of its mouth to an impressive degree, much more of the actual eating is done with the side of the mouth. The teeth are used to shear off meat, almost the way that you cut the breast meat off of a chicken or turkey, cutting parallel to the bone. When eating in this manner, a modern lion can eat without needing more than an inch or so clearance between the canine teeth and the lower jaw, a method that would have probably worked well for saber-toothed cats as well.

Source: Sabertooths eating from carcasses: How did they do it? by Mauricio Antón, Chasing Sabretooths