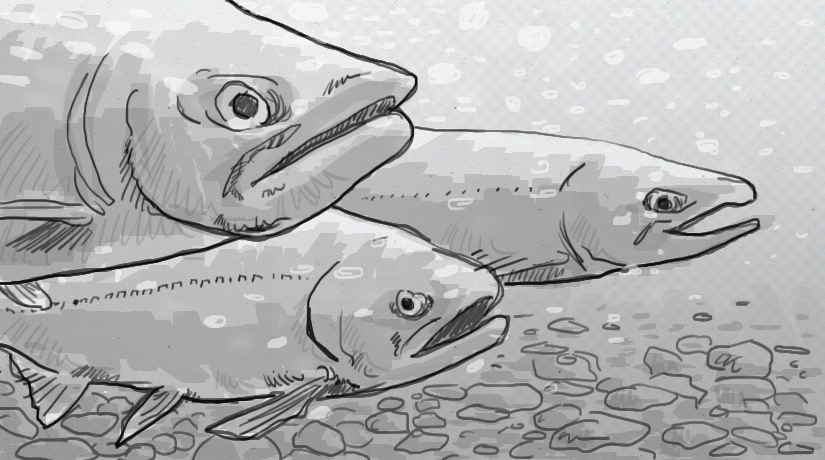 As if swimming upstream, risking being devoured by bears and eagles weren’t enough, salmon are so dedicated to their reproductive dreams that they literally reconfigure their bodies to make the trip. These changes aren’t to impress potential mates as they are ways to survive the journey, which may be up to 1000 miles from start to finish. Aside from changes in muscle tissue jaw-shape, they also need to change their range of vision, which scientists now know is possible thanks to vitamin A.

For light to be perceived, it has to come in contact with the tissue in an eyeball. For color vision, pairs of proteins called opsins and chromophores work together as a pigment. When colored light hits the chromophore, it absorbs that frequency of energy, activating a signal through the opsin, which can then pass the signal on through the optic nerve to the brain. The exact light that triggers this event is therefore dependent on what chromophore is present— changing that protein then changes what light is detected by the eye.

Most chromophores are built around vitamin A as a starting point, with finer chemical tuning determining the exact spectrum of light that will be detected in that portion of the eye. Experimental data from zebrafish, as well as observational data from bullfrogs, has lead researchers to a gene called Cyp27c1. While this gene doesn’t appear to do a thing for human vision, the benefit to the salmon is more direct. This gene produces an enzyme that can transform vitamin A1 into vitamin A2, resulting in different activation points for their visual pigments.

Seeing in the stream

The result of this shift is that the salmon heading up rivers will be able to see more of the red to infrared spectrum of light. Rivers are generally muddier than the open ocean, and so as the salmon adapt to their freshwater singles getaway, they’re shifting their vision to better match that of freshwater fish. The small slice of infrared spectrum they’re able to see better allows them to see past the grime of the river, making their trip just a bit easier.

Source: How Salmon Switch on Infrared Vision When Swimming Upstream by Ed Yong, The Atlantic