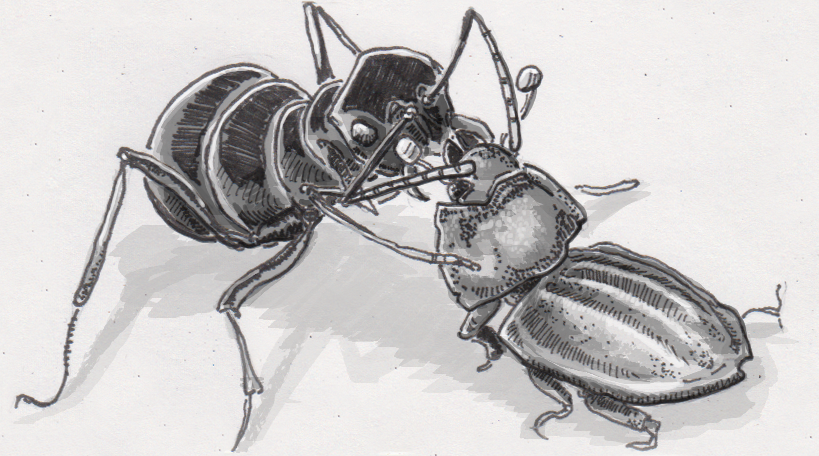 Jet ants and sap beetles share a lot of similarities. Both insects depend on trails of pheromones to smell their way to their daily destinations. Both eat honeydew secretions obtained from aphids. Both depend on a regurgitation process to share that honeydew. However, all these commonalities don’t mean the two species always get along, mainly since the sap beetles do all this at the expense of the ants, occasionally triggering rapid, if slightly ineffective, retaliation.

Once a jet ant (Lasius fuliginosus) harvests honeydew from an aphid, it tries to carry it home in a special stomach called a crop. As with birds that regurgitate food for their young, the ants don’t digest the food kept in the crop so that it can be delivered “fresh” for friends back home. of course, the sap beetles (Amphotis marginata) have figured this foraging pattern out, and will hone in on the ants’ pheromone trails in order to intercept honeydew-laden workers for meals of their own.

When a sap beetle encounters an ant, it basically just walks up and requests a snack. Mimicking the movement of actual ants, the beetles tap the ant’s legs and antennae which prompts the ant to lick the beetle’s head. The beetles, as evolution would have it, secrete a liquid from their heads that scientists suspect confirms their ant credentials, allowing them to then force their mouth against the ant’s and wait to be fed whatever honeydew the ant was carrying home in its crop.

The beetles have a pretty high success rate, although they do have a plan ‘B’ if the ant catches on that it’s being tricked. They can pull all their appendages under their wing cover and flatten out against the ground. The ants can’t get at them under this protective shell, and are basically forced to move on to replace their stolen honeydew.

Putting numbers to the pilfering

To make sure these behaviors weren’t anecdotal evidence, scientists captured ants and beetles to more carefully track them in the lab. The honeydew was replaced with a sugary liquid doped with radiation that would allow researchers to trace exactly how much food was in each insect’s body, allowing them to quantify exactly how the ants and beetles interact. They found that the beetles truly have a kleptoparasitic relationship with the ants, doing nothing but stealing the ants’ food. In fact, beetles mooched off ants so well that they generally ate 1.8 times more food than ants relying on relayed sugar water. While it may seem like a one-sided relationship like this would be corrected by the ants, it’s possible that the beetles aren’t demanding enough food to force a change in the system. As long as the ants can still successfully reproduce, the beetles are an annoyance, but not necessarily an evolutionary pressure that will force them undergo radical change, like maybe learning what other ants look like.

Source: ‘Highwaymen’ beetles rob ants of the food in their stomachs by Mary Bates, New Scientist