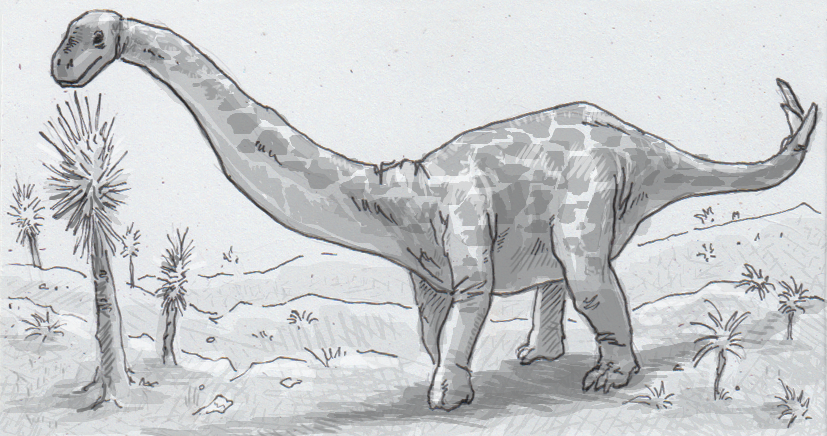 Spinophorosaurus nigerensis was a 43-foot-long sauropod dinosaur, with about 40% of its body length tied up in it’s neck. That lengthy appendage was necessary to enable efficient feeding for these massive herbivores, and so it stands to reason that evolution equipped these animals with a few specializations to make the most of their vertebrae. Sauropod neck bones had specialized neck-ribs, hollows and even joints, all to keep dinosaurs like Spinophorosaurus‘ head aloft and eating as much as possible. Now researchers have found evidence that these bones even grew and fused in a specialized way to better accommodate the intense workload demanded by their eight-ton owners.

While our backbones don’t have to contend with the same stresses facing a sauropod dinosaur, we do share some similar developmental patterns as we grow up. Vertebrae in all mammals and dinosaurs are actually pieces of bone each when we’re born. The centrum sits, appropriately, at the center, while the neural arch fits against that, acting as a protective sheath around the spinal cord. In humans, these two bones fuse together by the time you’re six or seven, but in sauropods this fusing is thought to have taken as much as 20 years, which seems like it should have been a problem.

A tight grip while growing

With the number of other adaptations required to help these animals move their heads around, the weaker cartilage between the centrum and neural arches seems like a significant deficiency. You don’t usually want unnecessary wiggle room when something as delicate as a spinal chord is involved, but fossil vertebrae indicate that sauropods like Spinophorosaurus had a way to compensate for this slow growth process.

Rather than the relatively smooth edges that are found between most animals’ centrums and neural arches, Spinophorosaurus‘ bones apparently joined along a zig-zagged point of contact. This meant that while waiting for the bones to fuse, they would almost be mechanically interlocked, more like puzzle pieces than parallel surfaces. Aside from acting as a form of grip, this would have extended the amount of contact the bones had with each other. That extended surface area would have better distributed force and stress, making the activity of the grazing Spinophorosaurus less of a concern for the maturing vertebrae.

My second grader asked: I know that long necks would let these dinosaurs reach high leaves like a giraffe, but why did they need that? Why was that so helpful?

The current hypothesis is that a long neck would allow the animal to avoid having to walk so much, more or less. As studies find that even reinforced necks probably afforded a good range of motion, it seems plausible that keeping your heavy body still while having your relatively light, minimal head zip around to vacuum up foliage would be an efficient way to feed. With mouths that couldn’t even chew their food, it seems like these dinosaurs likely aimed for as much bulk as they could swallow, and so keeping their mouth as portable as possible fits with that model pretty well.