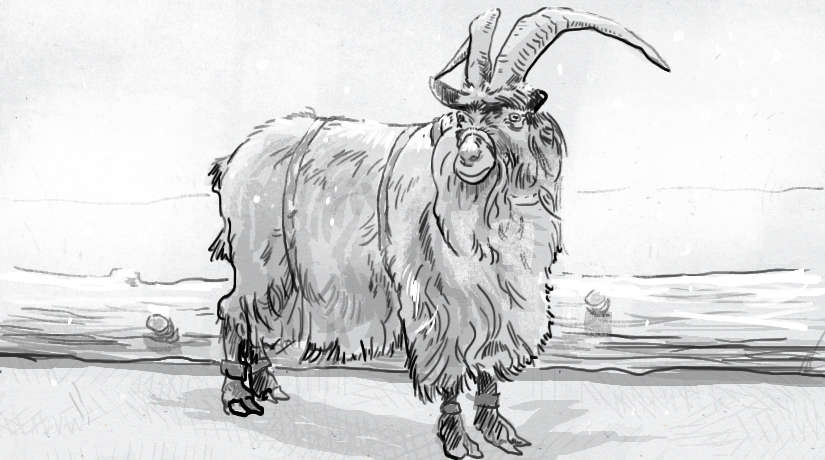 Despite their current lock on the December holiday, reindeer weren’t the first horned (well, antlered) animals to be associated with Christmastime. Well before Santa Claus was arriving on his sleigh, gifts in northern Europe were being brought as part of Yule, possibly courtesy of a the Julbocken, or Yule Goat. This goat’s place in the holiday season has changed over the years, possibly starting among the gods only to become an annual target for arsonists.

The Yule Goat can probably be traced back to a healthy appreciation of the magical goats that pulled Thor’s chariot. It’s said that the Norse god of thunder’s two goats, Teeth-barer and Teeth-grinder, could be eaten and then resurrected the next day. Eating goats then probably tied to feast celebrations, some of which would have happened at Yule, an ancient mid-winter holiday. Yule also celebrated successful harvests, which added elements of wheat and straw to the holiday motifs.

Yule was also a time for communities to spill into the streets for various forms of merriment. Singing, dancing and small plays would be enacted, as well as small pranks. By the 17th century, it was likely that one of the costumed players would be portraying the Yule Goat themselves. While the Yule Goat was sometimes a scary character demanding gifts, by the 19th century this role had been reversed. Instead, Saint Nicholas began traveling with the Yule Goat, with the two of them bringing gifts as a team. This was tied to growing Christian influences, with goats having been associated with the devil, and Saint Nicholas being seen as conquering that evil.

A more whimsical tradition involved the Yule Goat as a overseeing spirit. It was said to appear before the Yule celebrations to ensure proper adherence to expected norms, although those appearances were a bit of a game in themselves. Small goat figurines were made from rough wood or straw, and were to be secretly hidden in neighbors’ houses. Discovering a straw goat in your house meant you then had to sneak it into a new household without being caught.

Today, the Yule Goat has a changed appearance again, growing much larger in the process. In 1966, the city of Gävle erected a four-story-tall Goat out of straw. The happy, red-wrapped spectacle was unfortunately the target of vandals, who set fire to the Goat, not once, but 36 times in the intervening decades. City officials have now started using fireproofing, hopefully to stunt the growth of this more destructive tradition before it takes hold any further.