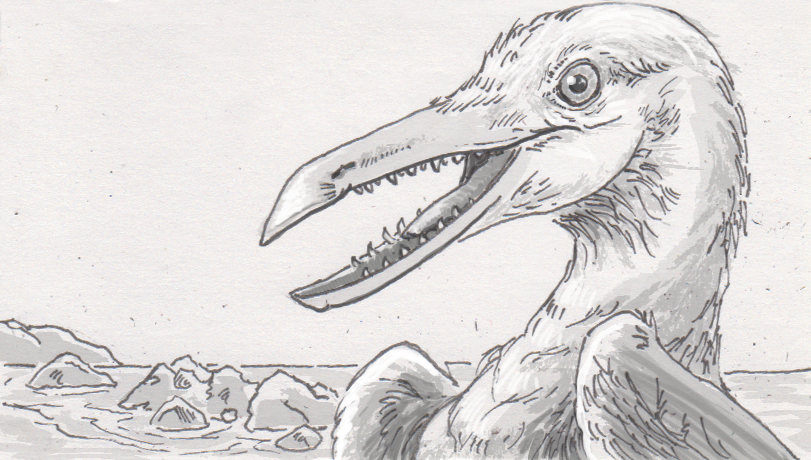 When the first Ichthyornis dispar fossils were discovered in the 1870s, paleontologists thought it was actually two animals buried in the same spot. The body was decidedly bird-like, but the jaw looked like it came from a marine reptile. Further excavation convinced people that the strong, tooth-filled mouth was indeed part of the accompanying seagull-shaped body, and instead of a chimera, no less than Charles Darwin himself suggested that it was a great example of a transitional species. More recent studies, including reexaminations of those original specimens, have basically confirmed this view, especially as new details reveal even more features found in modern birds in this 100 million-year-old dinosaur.

The latest study of Ichthyornis gathered data from museum collections, plus a new specimen that was never fully excavated from the rock it was buried in. Unlike earlier finds that were partially damaged over time, this new specimen retained its original shape in all three dimensions. CT scans allowed researches to build a digital 3D model, then compare that to earlier Ichthyornis skulls. This not only confirmed more obvious anatomy, like the toothed jaw, but also revealed more subtle features, including an independently-mobile upper jaw. This is something previously seen only in modern birds, making this the earliest known example such anatomy.

Blending toothed jaws with a touch of bird beak

The tip of the mouth was also a first. While the smooth, curved beak may look like your everyday seagull snout, the shape, keratin covering and aforementioned mobility make it the first known snout to function like a modern bird’s beak. This beak could have been used like pinching fingers, allowing Ichthyornis to peck, preen its feathers or pick up small objects. Paleontologist Bhart-Anjan Bhullar, who lead the investigation, even commented that the precise grip offered by Ichthyornis‘ beak may have helped it compensate for its lack of hands, which were essentially flight-ready wings instead of the clawed digits seen on theropods like a Velociraptor.

Of course, as a transitional species, Ichthyornis wasn’t exactly an ancient seagull. Keratin only covered the tip of its snout, leaving plenty of room for a more reptilian mouth, complete with teeth. The lower jaw also had considerable muscle-attachment points, suggesting that unlike many modern birds, Ichthyornis could bite with considerable force. All these features may have then added up to a dinosaur that could nimbly pluck prey like fish or crustaceans out of the water before chomping them into bits with its powerful teeth.

First features of our feathered friends

Scientists can’t say for sure that Ichthyornis is a missing link in the evolution of modern birds. Just because it looked like a collection of both ancient and modern theropod features doesn’t mean that it was directly related to any bird species alive today. However, it does help establish when in history these features evolved, making many modern bird features a product of the Mesozoic era.

Source: This ancient fowl bit like a dinosaur and pecked like a bird by Carolyn Gramling, Science News