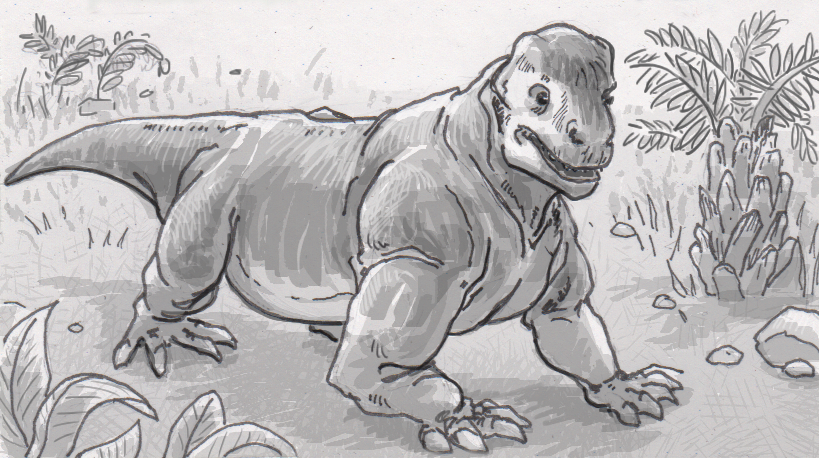 Over 100 years ago, a fossilized skull was excavated from South Africa. The creature was dubbed Moschops, and it was one of many bones that have since been found in the region. The initial examination found that the heavy-set herbivore probably grew to as long as 16 feet, weighing up to two tons. The creature was nearly all chest and shoulders, with thick legs but a relatively small, bulbous head. And that’s just about where the story would end if not for CT scanners that have now allowed researchers to peer inside this petrified skull to see some of Moschops inner workings, however small they may be.

CT scans, also known as CAT scans, are basically specialized x-rays that allow us to look at internal structures of dense objects. In the case of Moschops, researchers were able to differentiate which minerals were originally skull and which parts of the hard lump were once soft tissues like the brain. This allowed them to gain a much more detailed understanding of the animal’s anatomy, leading to hypothesis about the behavior of this long extinct creature.

Little brain in lots of bone

The most exciting aspect of Moschops‘ brain was how small it was. The rhino-sized animal only had a brain the size of a chicken egg, meaning most of the skull’s domed cap was actually six inches of solid bone. This kind of armor suggests that the brain was being protected for a reason, with speculation immediately pointing to head-butting activity like that seen in modern rams and deer.  Beyond the brain, other sensitive structures, like the inner ear and nerves connecting to sensory organs in the face, were equally protected. In fact, the positioning of the inner ear indicates that Moschops regularly kept its snout pointed to the ground and its forehead pointed forward. This contrast to the positioning of say, a dog, may another indicator that this creature was adapted to crack heads, although it probably also helped with grazing behaviors as well.

Funnily enough, the protection of this tiny bit of gray matter may indicate a considerable amount of sophistication in Moschops behavior. If these herbivores did bang heads like modern rams or deer, it means they had social contact within their species that valued such interactions. These social relationships require a degree of cognitive prowess to pull off, even if you’re impressing your friends by smashing your heads together.

My four-year-old said: It looks like a baby long-necked dinosaur with no neck yet.

The thick build of a Moschops torso and small head is somewhat reminiscent of a sauropod dinosaur like Brachiosaurus, but Moschops wasn’t a dinosaur. It was part of a group called therapsids that predated the dinosaurs by around 30 million years. Also that stubby neck probably would have been better suited for head-butting compared to the hollow–boned necks sauropods perched their heads upon.

Source: New insights into the survival techniques of a prehistoric beast by Julien Benoit, The Conversation