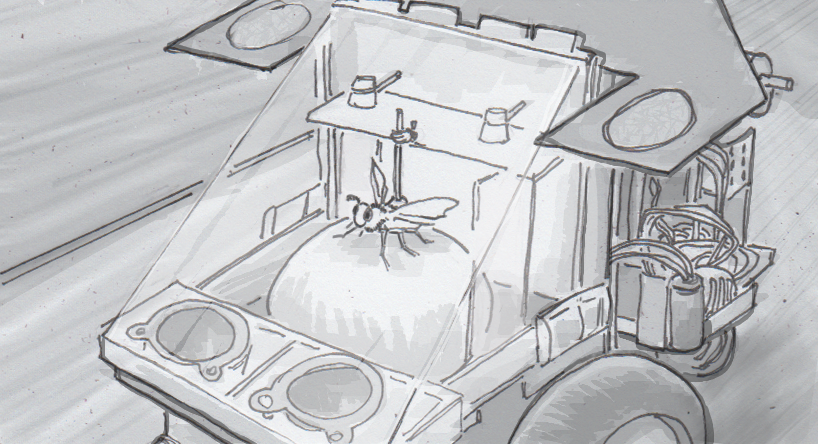 Silkworm moths have been domesticated for thousands of years, primarily for the silk they create as larvae. The adult moths recently got a new job though, thanks to a research team from the University of Tokyo that’s looking into how insects might navigate based on smells in their environment. The twist is that rather than let the moths flutter about as they normally would when tracking their favorite scents, they’ve been installed in custom, robotic cars, which they can control with their feet.

Piloting a bug-car takes a bit of preparation on the part of the moth. A patch of their back is cleared of any scales or fuzz, allowing the moth to gently be glued to a small rod. That rod then stabilizes the moth over a small polystyrene ball, which is floating on a tiny cushion of air to allow it to turn freely from its position in the bug-car. Once the moth is positioned above the ball, it can “run” along the ball, which then turns and triggers sensors about its movement, much like a trackball used to control a computer.

Navigating with their noses

While there’s a bit of confused wing-flapping, the moths have proved to be quite adept at driving their cars. In addition to the specialized cockpit, the bug-car is also equipped with two air-intake tubes, drawing in odors from either side of the vehicle. The moths can then react to the incoming smells, and adjust their course accordingly to reach their source. Well, mostly. While the moths can drive their cars to the odor sources within two seconds of pedestrian moths, they generally take a winding, circuitous route to get there.

Obviously, moths don’t need these sweet rides to make their way to a source of food or pheromones. The project’s real goals relate less to assisting moth mobility and more to using moths as a model, or direct stand-in, for a robot’s odor-seeking brain. From rescue operations to sniffing out contraband, robots that can detect and move to sources of various odors may prove to be quite useful, and so these moths should help design future robots and vehicles. If moths are retained as pilots in the future, they’ll likely be genetically engineered to target specific scents. There’s no need to reinvent the scent sensitivity evolution has already created, especially if it’s so easy to turn a moth into an odor-seeking cyborg’s brain.