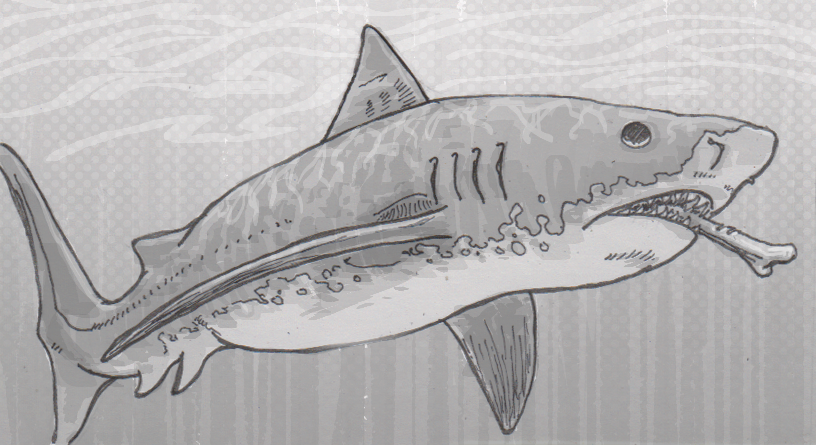 Scouring human skeletons for signs of scavenging by sharks

You’re probably never going to be attacked by a shark, much less killed by one. However, that doesn’t necessarily mean a shark will never try to make a meal of you. Forensic researchers in Florida are studying how to identify the aftermath of scavenging sharks, as it seems that while sharks aren’t looking to eat a lot of live humans, they might have less of a problem with eating those of us that have already died. This work may help with our understanding of sharks, but also help piece together deaths that might otherwise remain unsolved.

The first challenge of this work is that it’s being done entirely with human bones. The lack of flesh makes definitively determining the cause of death impossible, but that doesn’t mean that finding a skeleton on the sea floor is a dead end. The shape, size and texturing of damage to a bone can help reveal a lot about what damaged those bones, and when the damage took place. For instance, terrestrial predators like bears will leave smoother, puncture shaped marks in bone, while sharks (and unfortunately, sand) will leave striations and linear texture in areas that teeth have sliced through. In the cases were a shark did munching, the majority of those bites were the result of scavenging rather than actual predation on humans. We’re apparently more appetizing as leftovers.

In some cases there’s enough detail recorded in a bone to determine the type of shark involved. A dramatic example is the “candy caning” left by a bull or tiger shark. The shark will remove a limb from a deceased body, then spiral from one end to the other to pull flesh off, leaving a spiraled pattern of damage on the bone. Knowing the species of shark involved can then help investigators, because it indicates where a body must have been to encounter that species of shark. This can help piece together someone’s death, especially since ocean currents are so good at moving bodies around without regard to preserving a possible crime scene.

My four-year-old asked: Why are these people dead in the water in the first place?

Some deaths may have occurred elsewhere, and like a long-lost dinosaur, the body was later washed out to sea thanks to a river or temporary flooding. Boating accidents and drownings can also leave bodies in the surf that might be appealing enough for a shark to take a bite. These aren’t exactly common occurrences, but places like Florida’s shark and human populations are high enough to make this line of research worth investing in.