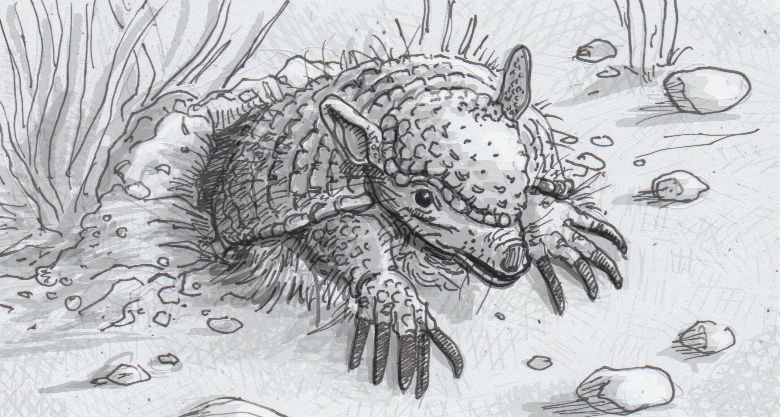 When you’re a small armadillo, weighing in under two pounds, it’s hard to be intimidating to potential predators. Even a layer of bony osteoderms may not be enough to discourage wolves or cougars from taking a bite. Fortunately for screaming hairy armadillos, there’s still the option of, you guessed it, screaming. When threatened, the small mammals will screech loudly to startle or just irritate their attacker into leaving them alone. Obviously, screaming alone isn’t enough to get you through life, which is why these armadillos have a few more tricks up their carapace.

When their not annoying predators, screaming hairy armadillos (Chaetophractus vellerosus) are likely burrowing or looking for food. They’re omnivores, eating just about anything smaller than they are, from plants to beetles to lizards or birds. They can’t exactly weaponize their screams for hunting purposes, so instead they use their claws, armor and heads to good effect. Burrowing is an important part of insect collection, and the armadillos will sometimes tunnel under carcasses to find hidden insects, or even dig a cone shaped hole in the ground with their heads to find food to eat. Most dramatically, there have been observations of screaming hairy armadillos throwing themselves onto small snakes, employing the tough edges of their carapace to slice at the baffled serpent.

They’re apparently not the most careful eaters, as some specimens have been found with copious amounts of sand in their stomachs. The irregularity of this occurrence hints that the sand is not ingested for any real purpose, like gastroliths, but is just he byproduct of an animal using its face to look for food in the dirt.

As with many other armadillos, the screaming hairy armadillo also makes burrows as shelters. Sticking to habitats with looser, dry soil, they dig both to find insects but also to have a place to wait out daytime heat during the South American summers, coming out only at night. In the winter, this schedule gets reversed, and the armadillos become diurnal instead, and are able to stay warm enough thanks to their abundance of hair (making them one of the most aptly named creatures on Earth.)