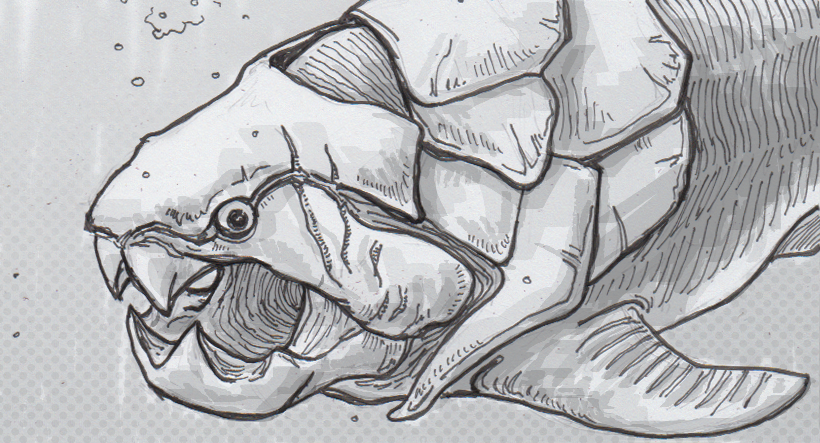 Ancient sea creatures that turned their teeth against their own species

Humans have pretty handy teeth, but we don’t often think of them as our primary weapons in a fight. Sure, some people have done some considerable damage with their jaws, but our teeth seem to be better suited to eating, social signaling, and helping us talk. For animals lacking hands and feet, teeth have had to do a bit more work, and in a number of cases were likely employed against peers in various situations. This kind of intra-species chomping dates back to before the dinosaurs, and was sometimes severe enough to leave clear evidence in the fossil record. Even limiting our scope to marine animals, it seems that biting each other has some strong links to how animals picked up a date.

Dunkleosteus was a placoderm fish from the Devonian period, some 108 million years before the age of dinosaurs. They could grow as long as 20-feet-long, and had impressive armored plates covering the first third of their body. They also didn’t sport teeth the way we think of them, despite the clearly visible, fang-shaped weaponry built into their mouths. Rather than enamel-covered tissue with roots and whatnot, their outer fangs were just sharp points in their bony armor that would shear against each other when they bit down. As the fish aged, their jaws grew proportionally longer and their teeth thicker, meaning their bites became slower but more powerful. As such, young Dunkleosteus probably spent their time biting smaller, quicker prey, but larger adults targeted beefier animals, including each other.

Skulls of Dunkleosteus show damage in their thick armor that would have required a robust bit to make. The grooves and scratches were found near seams in the fish’s armor, and may indeed have been made as a predatory, cannibalistic act. However, if these makes, which have been found on more than one specimen, were the result of intra-Dunkleosteus fights, they may have also been non-lethal, and intended as a show of dominance for mating or territory rights. Taking place over 300 million years ago, it certainly wasn’t the last example of such fighting.

Munched on by mosasaurs

Mosasaurs were large marine reptiles living in the Cretaceous period, and may have been apex predators for their local ecosystems. Similar to the wounds found in Dunkleosteus, bite-marks in a Mosasaurus specimen don’t leave many possibilities for who would be challenging a 21-foot-long sea monster with jaws resembling a beefy crocodile. This particular skull was found with three lesions from bites, at least two of which had time to heal, suggesting they were tied to assertions of dominance, rather than hunting for food. One bite even had part of a broken mosasaur tooth left in it, likely from the same species as the victim. The third bit is less clear, but it seems that these reptiles fought for resources much like their modern relatives, like gila monsters, still do.

Chompy sea monsters don’t sound all that unusual, but even salmon from five million years ago put some effort into brawling with each other. Some species may have grown to over 400 pounds in size, with large, tooth-like tusks sticking off the sides of their mouths. As filter-feeding fish, those tusks probably weren’t very useful to catch plankton, but they would have been effective weapons against other large fish. Just as salmon undergo a few physiological changes when they journey from the ocean to freshwater to spawn, these ancient ancestors’ faces seem to have become more weaponized to fight with rival suitors.

When comparing these huge salmon in saltwater environments to their freshwater counterparts, it was noted that the toothy-tusks changed shape and size. Salmon fossils found in freshwater environments were generally curvier and larger, and bore more signs of wear and tear. This would presumably help during the already intense efforts salmon put into spawning. There is a chance that these spikier faces were simply used to help dig at riverbeds to scare up food. Unless we find some salmon skulls with telltale injuries, we may never know for sure what these fish were up to.