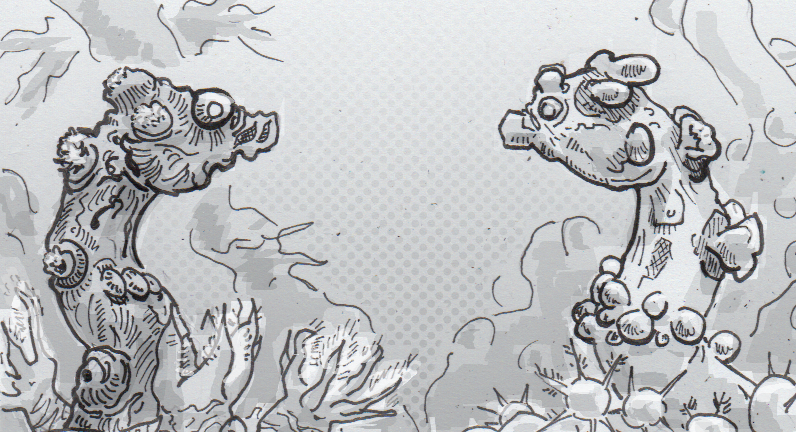 Pygmy seahorses weren’t discovered until 1969, but their tiny size is only part of why they were overlooked for so long. The two-centimeter long fish have also evolved some amazing camouflage, making them nearly invisible near their favorite sea fan coral. Unless, of course, it’s the wrong sea fan, in which case they’d probably end up sticking out like a sore thumb. Purple on orange is kind of hard to miss, even when it’s tiny.

Fans of both sea fans

There are two species of sea fan coral that pygmy seahorses frequent, purple Muricella plectana and orange Muricella paraplectana. The general structure of the two species of coral is generally similar, providing nooks and stalks for the seahorses to hold and hide in, although the the purple M. plectana features tubercles with a decidedly more tasseled shape. Amazingly, the seahorses somehow match both the differing colors and shape of their particular coral home, which has been a bit of a puzzle for researchers. Where they relocating to find the coral that was right for them, or were they somehow shaping their color and tubercle growths to match the coral?

To figure just when and how pygmy seahorses developed their coral-specific camouflage, researches needed a way to make them easier to observe. Since they were of course very difficult to find in the wild, they first built an environment in an aquarium that could support both M. plectana and M. paraplectana. After three years of creating the correct, krill-filled environment for the coral, they finally sought out a breeding pair of seahorses. They avoided touching the tiny, fragile fish directly by coaxing them onto a piece of cut coral before whisking them back to their lab in San Francisco, on the other side of the Pacific.

While both parent seahorses were of the orange persuasion, found among M. paraplectana coral, their offspring were happy to branch out a bit. While they were born a sort of non-descript, dark brown color, their mature color and ornamentation depended on where they grew up. Regardless of their parents’ orange features, offspring were fully capable of growing into either coral environment. It’s not clear at this point what the catalyst is for this development, or how the the seahorses’ DNA handles instructions for two significantly different appearances. Since researchers can now more easily observe these tiny creatures, we will hopefully have some bigger answers soon.

Source: The World's Tiniest Seahorses are Masters of Disguise by Sarah Keartes, Cute and Cool