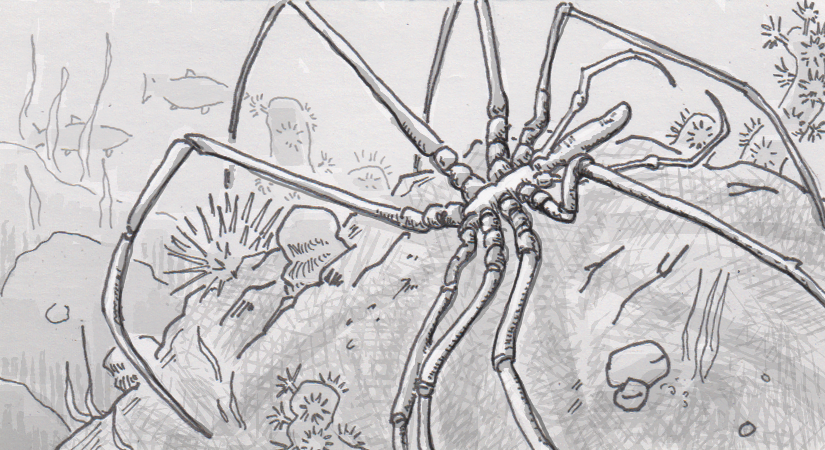 As a squishy, somewhat elastic human, I don’t have to spend much time thinking about if there is room in my body to accommodate all my organs. If anything, aging has made me more concerned that my abdomen is too flexible about making room for my stomach, intestines and fat. Like many things in life, personal experience shouldn’t be used as a standard against the rest of the world, and indeed there are animals that have succeeded for around 500 million years with the opposite problem. Sea spider bodies are so small and compact that organs we keep in our torso have had to be distributed into the animals’ legs, although rather than suffering or complaining, this unusual arrangement has been leveraged to create a very efficient body plan.

A sea spider isn’t a spider, or even an arachnid, but it does bear a strong resemblance to spindly spiders like a daddy long legs. In fact, with the proportion of their body mass that is actually leg, they may be more deserving of the “long legs” moniker than the spiders. In many species of sea spider, the legs come together at a body that seems to be just big enough to act as a hub for those limbs— there’s hardly any differentiation between the thorax and abdomen, and heads are often just big enough to carry eyes, mouth parts and some eyes. As such, the legs don’t just literally carry the body, but also carry many biological duties we normally associate with bulky midsections.

While the sea spider bodies are minimal, their legs handle a lot of different functions quite well. They help with respiration by creating a lot of surface area for oxygen to diffuse into the body from the surrounding sea water. They also carry their sex organs in their legs, releasing eggs and sperm through small pores in their “thighs.” Tiny torsos don’t allow enough space for an effective digestive tract, and so the legs also hold coils of the arthropod’s intestines. Fluids are sucked out of sea anemones and sponges, then pumped through each leg in as the digestive organs squeeze and contract. Our guts do this too to an extent, but as invertebrates, sea spiders have exoskeletons that their guts have to push against from the inside. So rather than flexing and expanding, each gut contraction has to squeeze other fluids up or down to make space in the cavity of the leg.

This might sound awkward at first, but sea spiders have been found to use these contractions for two functions. Aside from moving food through a digestive tract, the other fluid that gets squeezed up and down has recently been found to be hemolymph, or the sea spider’s equivalent of blood. This means that the animal’s undersized heart only needs to serve the head and torso, while the legs’ circulatory needs are taken care of thanks to contracting guts. This not only saves space in the body, but also saves energy, as the heart doesn’t need to work nearly as hard to get blood moving down and back through each long limb.  As weird as it sounds, it’s a successful enough system to helped sea spiders find homes in oceans all around the world.

My seven-year-old nephew asked: So if I stepped near a sea spider, would it try to bite me?

Probably not, and if one did, you probably wouldn’t notice. Many species are tiny, and their piercing mouth parts probably couldn’t get through your skin. The largest species, Colossendeis megalonyx, can grow to three feet across with a proboscis as long as a finger, but they’re still basically benign creatures that wouldn’t behave aggressively about your feet. Also, as this species lives in deep water under the Antarctic ocean, chances are you wouldn’t be walking near it in the first place.

Source: Sea Spiders Pump Blood With Their Guts, Not Their Hearts by Ed Yong, The Atlantic