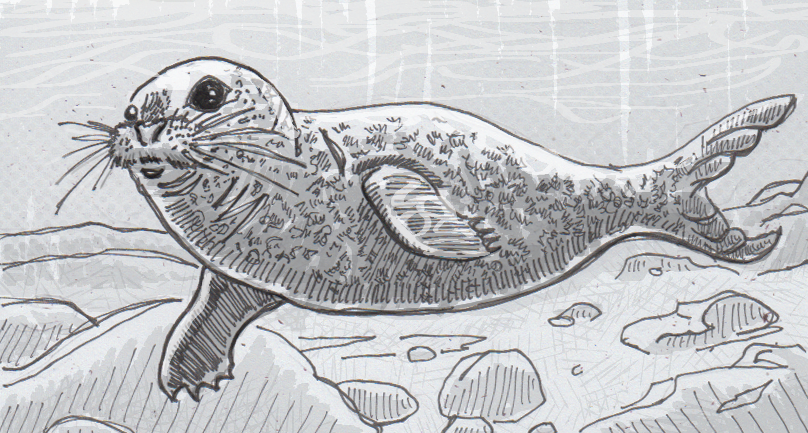 Seals’ anatomical specializations allow for extraordinary senses under the sea

As adorable as a harp seal pup is, it turns out that their faces didn’t evolve just to draw our affection. Kinderschema is nice and all when it’s time for a conservation campaign, but cuteness doesn’t necessarily put food on the table. Anthropocentrism aside, seals’ large, glossy eyes are actually part of their predatory tool kit, allowing them to track prey through otherwise impenetrably dark water. This low-light sight is backed up by good hearing, as well as sensitive whiskers that can more than make up for all the above senses combined.

Seals’ eyes have evolved to handle navigating for food underwater. To gather as much light as possible, the relatively large eyeballs are loaded with rod cells, albeit at the expense of color-sensing cone cells. Additionally, seals have a reflective layer along the back of their retina called the tapetum lucidum, which reflects light from the back of the eye for a second pass at being picked up by the rod cells.

Gathering light isn’t much good if it can’t be focused though, and seals have another few adaptations to make sure they make sense of what they see underwater. To help deal with the way water refracts light as it enters their eyes, seals have very large, round lenses to help balance things out. There are trade-offs here as well— while seals can see quite well underwater, these specializations leave them with weaker eyesight on land, where their lenses can’t focus as well, their pupils need to stay contracted and their eyes need constant lubrication to deal with the dry air.

Amazingly, all these specializations don’t necessarily lead to seals’ strongest sense. While they seem to have put all their resources into tailoring their vision to navigating underwater, their whiskers are somehow even more sensitive. Technically called vibrissae, these hairs are loaded with over 1,500 nerve endings each, which allows seals to detect even minor perturbances in the water around them, such as the wake of a herring swimming 30 feet away.

Some of the whiskers’ power come from how well their movement can be controlled. The seals have muscles that can adjust individual hairs on their face, but the whiskers’ undulating shape helps them cut through water without wiggling on their own. This means that each whisker can hold still when the seal moves, leaving it ready to be vibrated by the movements of other creatures in the water instead. If this shape and sensitivity can be recreated in a lab, it may be a big upgrade on current underwater sensor technology. It might even make our tech cuter to boot.

Source: Seals Use Their Whiskers to See and Hear by Bret Stetka, The Atlantic