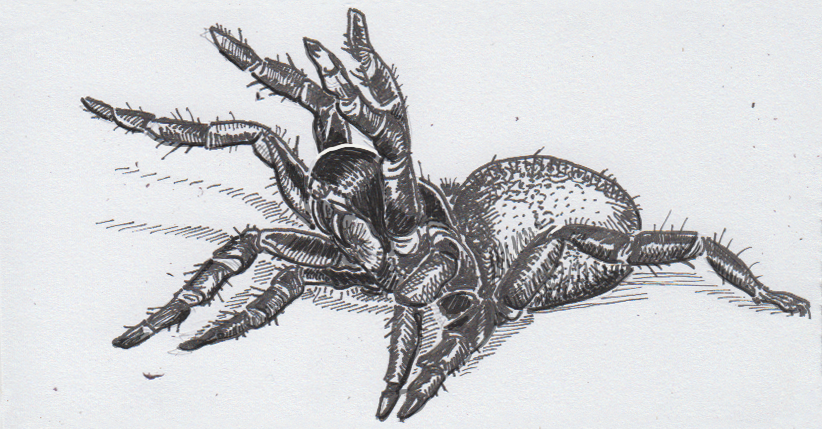 Securing sources of spider venom, without the spider!

We’ve all been there— you’re trying to acquire a decent amount of spider venom, but just can’t stand all that creepy, erratic wriggling from the spiders. Not to mention the sticky, inconvenient webs and annoying habit of hiding in tiny nooks and crannies everywhere. Well, squirm no more, because it turns out there are alternative sources for a good spider venom proteins that won’t trigger the ole’ arachnophobia! All you need is some genetically modified yeasts, or a virus infecting a bacteria infecting an insect…or spider.

The value of venoms

At this point you’re probably thinking “why would I need more spider venom in my life?” Because you want to do what spiders can do! No, not the “walking on the ceiling thing,” the “killing loads of insects” thing!  Spider venom proteins can be used to make effective but safe insecticides, because spiders have been killing insects for 350 million years! But unlike conventional insecticides, venom-based alternatives don’t linger as long in the environment, meaning less clean-up for you! They can also be carefully tailored for different targets, meaning you can keep your favorite bugs, like bees, safe and sound. If wiping out insects wasn’t enough, there’s also the promise of treating some forms of epilepsy or strokes!

“Wow!” you’re saying, “These spider venom proteins are great! But milking venom from spider fangs is a pain! And I still hate all those wriggling legs!” This is where yeasts come in— once a venom has been sampled the old-fashioned way, genetically modified yeast can build the key proteins for you, in much larger quantities. They can also produce other spider-sourced products, like the amazing silk known for its incredible relative strength and flexibility. If a yeast isn’t up to the task, bacteria may be able to take over and crank out venom proteins.

Now if you’re concerned about genetic modification, you’re a little behind the times, but you’ve still got options that don’t require eight twitching legs in your face! It turns out a virus called WO that infects the bacteria Wolbachia has started sourcing spider venom proteins ages ago! The virus needed a way to break through animal cells to reach the Wolbachia bacteria. Wolbachia infects arthropods from insects to nematodes to, yes, spiders, and so at some point the WO virus picked up a little help from black widows (Latrodectus hesperus). By borrowing some DNA from the spiders (hey, it’s a natural GMO…), the virus is now able to produce the same proteins the black widow spiders rely on shred through the cells of their prey. It’s the same venom proteins the pros use, but without the spider!

At this point we don’t have much control over WO or how it acquired the DNA necessary to produce these proteins, but manipulating viruses the bacteria they may infect is a definite point of interest. It may be another form of pest control that would work from the inside out. It’s definitely not available in stores, but researchers are still standing by to try to harness the potential.

Source: Spider Farming Is No Fun. Make Yeast Do the Work by Sarah Zhang, Wired