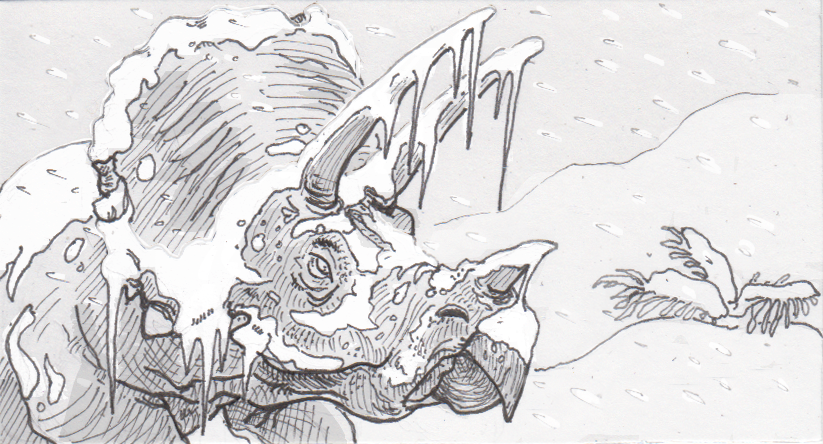 You’d think that mass extinction would be devastating enough, but every new detail that scientists uncover about the asteroid impact that wiped out the dinosaurs seems to somehow make a bad situation even worse. To the best of our knowledge, a six- to nine-mile-wide asteroid hit the Earth near the Yucatan Peninsula 66 million years ago, kicking off a series of catastrophes that resulted in the death of 75 percent of all living things. To glean even more detail about this traumatic event, scientists have been analyzing the rock and soil that was laid down at the time of impact in what’s known as the Chicxulub impact crater. What they’ve found is that on top of everything else, the world was plunged into a deep freeze that lasted up to three full years. And if that somehow wasn’t enough, there’s also a good chance that the whole thing stunk like a bad fart.

When the asteroid hit the Earth, so much debris was kicked up that it left a clear layer of sediment around the world, now known as the Cretaceous-Paleogene boundary. The rock layers at the crater itself offer a more granular picture of how this debris was distributed though, even revealing the exact angle of the asteroid’s impact. By comparing differences in composition on either side of the crater, researchers calculated that the asteroid was traveling at around 40,000 miles per hour, striking what was once a shallow sea at around a 60 degree angle. It instantly created an 18-mile-deep hole, although that pit was short lived as the walls collapsed inwards within minutes of the collision.

Beyond the crater itself, gigatons of material from the Earth and asteroid were vaporized in this violent process. Thanks to these new samples, researchers have amended earlier estimates about the composition of this material, all of which point to a colder, stinkier way to die. Smaller amounts of sulfur are associated with the smell of rotten eggs or fragrant hot springs, and can be combined in to poisonous compounds under the right conditions. In this more cataclysmic scenario, thousands of billions of tons of sulfur were ejected into the atmosphere, blanketing the planet in a layer of noxious gas thick enough to block sunlight. This general model isn’t new, but the amount of sulfur in these new figures far exceeds previous estimates. Instead of simply making photosynthesis difficult for plants on a darkened world, it’s now thought that global temperatures dropped by 47° Fahrenheit, dropping below freezing in many locations. This instant winter then lasted for at least three years, but possibly well over a decade.

The other measurement to come out of this visit to Chicxulub didn’t soften things at all. Looking at carbonates as a measure for the amount of carbon dioxide released during the asteroid’s impact, researchers realized that previous estimates had been too generous. There was still an impressive 425 gigatons of CO2 released, but that wasn’t enough of the greenhouse gas to really counteract the cooling effects of the sulfur in the air. Eventually things warmed up again, but the immediate jolt to global temperatures was clearly too much for most ecosystems to survive.