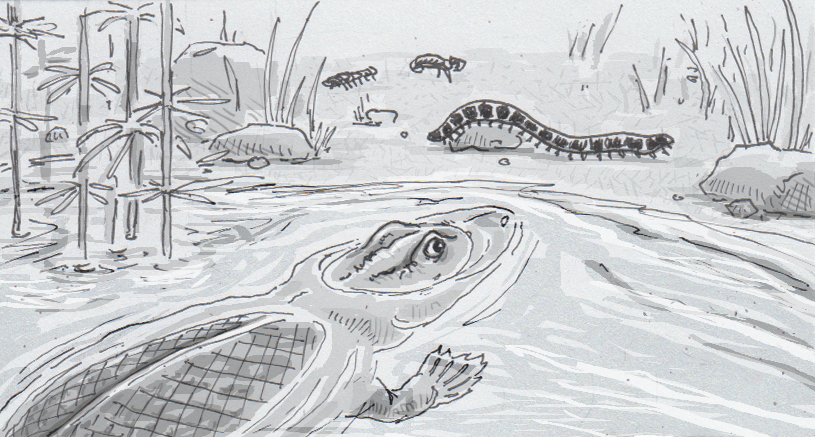 Around 385 million years ago, our ancestors began crawling out of the water and onto land. This started vertebrates down the long road to legs, hair and other major adaptions to make living out of the water work, and making everything from dinosaurs to humans possible. Figuring out the details of those first crucial steps has been a bit puzzling, but new research shows that while limbs and lungs matter, the real game-changers in this transformation were probably eyes and eventually, brains.

Scientists from Northwestern University and Claremont McKenna, Scripts and Pitzer colleges collaborated on multiple fronts, comparing both paleontological data from fossilized skulls and skeletons, and computational data in the form of simulations. They knew some of the major milestones in the evolution of the first tetrapods like Tiktaalik roseae, but wanted to really figure out the sequence of steps that led to such an animal, particularly concerning its vision, since, in addition to breathing air, would have been a drastic change for animals otherwise adapted to the water.

Water really limits vision, even for animals adapted to live in oceans and lakes their whole lives. It’s not that fish don’t have well-developed eyes, but there’s only so far the physics of light passing through water will allow for. Blue light can penetrate 900 feet in the open ocean, but almost all light is limited to around 160 feet near the coast, and it’s easy to imagine how murkier water would further shorten those distances. As such, fish often rely on other senses to navigate, using eyes for short-range interactions only. Light can travel much farther in air though, and so the first fish to poke their heads out of the water were probably in awe of the distances they could suddenly see. Importantly, there was a lot to see on shore, which probably kept those fish coming back again and again.

While fish were playing peek-a-boo 385 million years ago, insects had already been living on land for 50 million years. This bit is more speculative, but those bugs may have looked like an untapped food source to fish, giving them motivation to keep looking out of the water for opportunities to eat. Looking closely at this time period, researchers found that there was a significant change in eye anatomy in some fish— eyes nearly tripled in size, and moved to the top of the head to function more like a periscope. This wouldn’t have helped these fish’s vision in water, but it greatly expanded their view of the shore, probably spurring them for short hunting trips, ambushing insects a bit like a crocodile.

Seeing farther ahead in space, and in time

This change in hunting tactics probably changed more than eyes and, eventually, limbs. Fish’s normally limited vision forces them to have very quick reflexes to deal with a predator that suddenly comes into view, but doesn’t really support more medium-range planning. For the fish that could suddenly see three-times farther on land, it became practical and advantageous to start making predictions and plans about other creatures’ potential behavior. Approaching an optimal location to ambush prey takes a bit more thought than just snapping at movement in your field of vision, and so researchers suspect that this was the start of prospective cognition. Prospective cognition describes an ability to make judgments about the future, and is, for better or worse, most acclimated to help us deal with tangible, visible problem solving.

It may seem odd to think that the first step to walking on land was having the proper eyes, but that evolutionary journey would have never been made without motivation to do so. We can’t know exactly what was happening in these early tetrapods’ brains, but there were were apparently some species that changed their minds about this process, confirming the importance of eyes. In some cases, species actually returned to an aquatic lifestyle after having been on land, and in doing so, evolved to have smaller, lower eyes again, since the investment of long-range vision wasn’t going to help as much in the water.