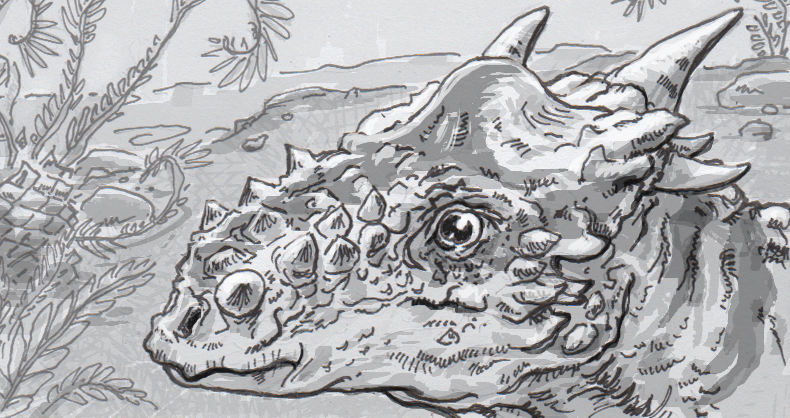 While paleontologists have found mummified dinosaur skin, fossilized stomach contents and even traces of dinosaur blood vessels, we don’t have any useful eyeballs. Fortunately, this doesn’t mean that understanding dinosaur vision is a total blind spot (ahem). Between eye socket placement, specialized brain structures and surviving relatives, we have a few hypothesis about how extinct dinosaurs saw the world. For instance, by looking at living animals like birds and turtles, scientists now think that dinosaurs had very good color vision, with better acuity than our own, particularly with anything that was red.

The eyeballs that were examined were from members of the clade archosauria. This group includes crocodiles, turtles, birds, and dinosaurs, but not earlier reptiles like lizards and snakes. Since turtles and crocodiles predate both dinosaurs and living birds, any genetics shared between the shelled reptiles and modern avians would have had to been passed down through extinct dinosaurs. As it happens, a gene called CYP2J19 fits the bill, as it allows both turtles and birds to see red, and thus probably did the same for every Brachiosaurus and Triceratops as too.

CYP2J19’s influence on archosaur vision isn’t a straight-forward as ensuring these animals have a red-sensing cone cell in their eyes. Instead, it allows the animal to create a special oil from yellow pigments obtained through their diet, which then acts as a color filter over their retinas. Almost like a prism, the oil separates incoming light into more distinct wavelengths, allowing for very sensitive perception of shades of red. While humans are one of the few mammals that can see reds at all, our retrofit red cones really only detect a few variation in red hues. Turtles, birds and presumably dinosaurs, can make out much finer shifts in scarlet thanks to CYP2J19.

See and be seen

The advantage this color sensitivity may have also stemmed from the same CYP2J19 gene. In addition to producing oil for better optics, the gene also helps archosaurs create red pigments in their own body. Various modern species, like zebra finches and terrapin freshwater turtles use red for sexual display, as brighter reds signal stronger health to potential mates. This may be to an association with surviving exposure to toxins, or it may be a case of just indicating that that particular animal is strong and healthy enough to survive standing out from the crowd, rather than staying hidden, almost like a lion’s mane. We don’t know how red dinosaurs may have actually been thanks to CYP2J19, but there’s certainly a chance they were showing off some bright colors.

One big caveat to this concept is crocodilians. They’re also archosaurs that predate dinosaurs, but they lack the CYP2J19 gene. It’s possible that this is because at some point between the rise of CYP2J19 in a distant ancestor and now, crocodilians lived a more nocturnal lifestyle. It would then follow that, like mammals, they gave up seeing red in favor of better night vision at some point in their past. Or maybe cool streaks of red just stuck out too much when they were trying to hide in the water.