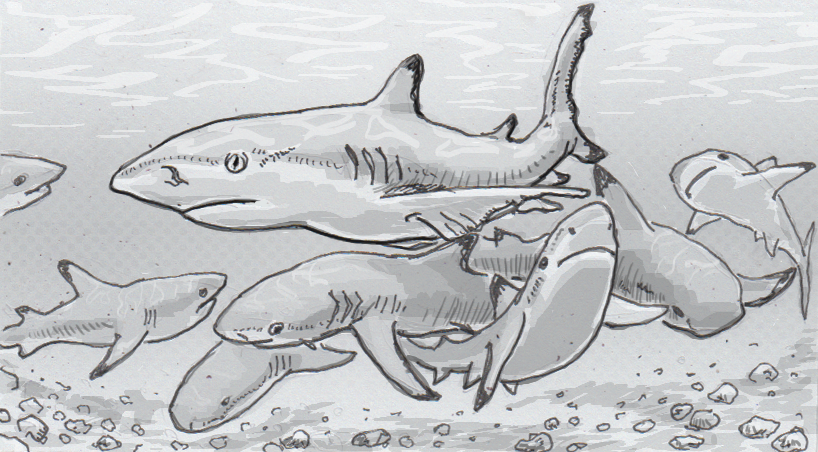 Sharks stick with their social networks instead of simply swimming solo

In what is hopefully not a huge surprise to anyone, scientists have been uncovering more and more signs that sharks are more than just swimming sets of scary teeth. The sharks haven’t been spotted photographing their food or anything, but they have been observed forming stable social networks that appear to be more significant than random congregations over food sources or flash mobs. Across a range of species, these networks will likely need to be carefully considered in future studies and conservation efforts.

One study followed two sand tiger sharks (Carcharias taurus) as they traveled the Atlantic ocean for a year. Radio acoustic tags on the two fish helped keep track of what other animals were encountered on this journey, and found that their interactions varied quite a bit throughout the year. Some time was spent alone, but there were also multiple instances of congregation. This may be tied to the availability of mates or food, but that wouldn’t completely explain what appeared to be a preference for specific individuals. Each of the tagged sharks had a few other sharks that they repeatedly intersected, running into “friends” over 20 times throughout the year.

In a very different study, blacktip reef sharks (Carcharhinus melanopterus) were observed interacting in their preferred environment off the coast of French Polynesia. Keeping track of the unique markings on each shark’s dorsal fin, researchers were able to track how the schools of sharks mingled with each other. There seemed to be a lot of different connections, versus some kind of strict hierarchy at play, suggesting that everyone knew everyone, so to speak. Researchers further tested this by removing some individuals, and found that groups remained cohesive even if around half the original members were missing. This is in contrast to a study of wobbegong sharks (Orectolobus maculatus), which raised concerns over key individuals’ removal leading to the destruction of the group.

The final social group that may affect sharks’ survival actually does have access to Twitter and Instagram, because they’re humans. Commercial fishermen routinely capture sharks accidentally, as the predators are drawn to the groups of fish being captured as easy prey. Unintentional capture of the sharks is referred to as bycatch, and it can be reduced if fishermen know how and where to avoid sharks on their lines. While some smaller networks are sharing this information, conservationists would like to see more fishing operations share this information so that shark bycatch can be avoided on a much bigger scale. In addition to helping save threatened species, we now know that such practices may also be saving some shark friendships as well.