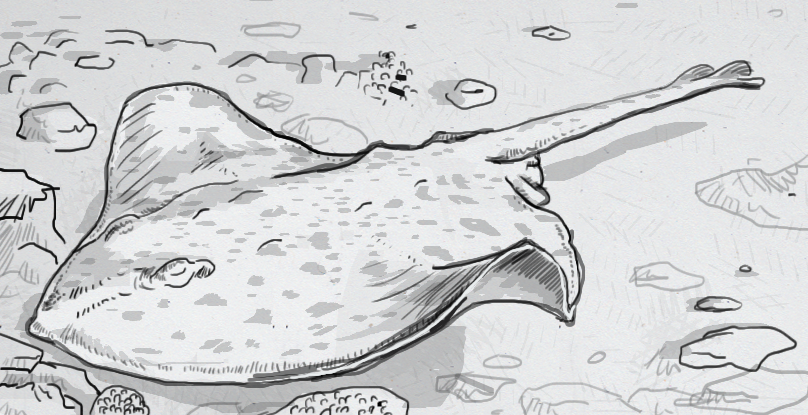 When evolution transforms an organism, it generally doesn’t create a new structure or tissue from nothing. While a mutation can cause a new structure to grow in an animal, even that requires some genetic information to be in place, which is then modified, not invented. With enough time, these changes can be dramatic, pushing snouts into beaks, fingers into clamps, and fins into wings. Some of those mutations have now been isolated in skates and rays, explaining just how they stopped looking like sharks and became the unusual fish they are today.

Skates and rays, as members of the batoid suborder, are noted for their winglike fins along the full-length of their torsos. They evolved as an offshoot from a shark ancestor, with reshaped propulsion allowing them better movement along the sandy floors of river and seabeds. Instead of fins that stick off most fish like limbs, batoid fins nearly surround the animal. Larger bones attach behind the animal’s head, extending both forward and back, parallel to the torso. From those “limbs,” a halo of smaller digits extend and provide structure and facilitating the fluid, undulating movement batoids are famous for as they swim.

The junction where the larger bones attach was the focus of recent study trying to find the exact change in the animals’ DNA that created this fin structure. The growth of embryonic skates was studied, which helped reveal when the fish changed from your standard set of flippers to flattened, surrounding wings. The crux of these changes were basically in two sets of genes. The first were the 5’Hox family of genes that lead to the half of each wing that grows from the “shoulder” back towards the tail. There wasn’t enormous changes in these genes from a sharks’, and if you cut a skate’s wing in half, you’d have a much more commonly shaped appendage.

The front half of each wing is possible thanks to more drastic changes to the 3’Hox genes. Rather than being part of the same ancestral fin the back portion of wings grow from, the front portions were found to grow from what had once been a shoulder region. A very different piece of DNA was basically re-purposed to grow these uniquely-shaped limbs, which then grew to appear as a single, cohesive structure. As unlikely as separate-but-melded-fins sounds, if you’re making tiny changes over millions of years, they’re still easier than inventing novel fins from whole cloth.

Source: How skates and rays got their wings by University of Chicago Medical Center , Phys.org