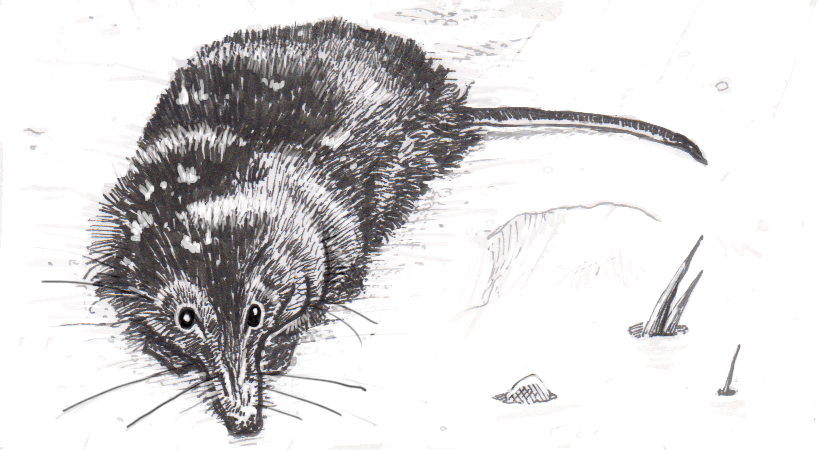 Shrews feed off their own anatomy to weather the winter

It seems that shrews are a bit confused about how mammals are supposed to handle winters. Most of us tend to eat a little extra, putting on fat that not only helps insulate, but can also act like built-in energy reserve in case food gets scarce. That’s especially important for animals who basically skip eating altogether thanks to hibernation or dormancy, as their fat will be their only source of sustenance until springtime. Common shrews (Sorex araneus) seem to have missed all this though, and instead of chipping away at their chubby tummies, somehow get by by consuming their own heads.

There had been casual observations about shrews shrinking in the winter, but it has been hard to track individual animals for a whole season without disrupting their natural activities. Fortunately, wearable tracking devices are becoming much less intrusive, and so researchers were able to keep watch on a dozen common shrews from one summer to the next. During a quick physical examination under anesthesia, animals were fitted with microchips that could help track the shrews location and major physiological changes. This all allowed for detailed timelines of exactly what shrews do to their bodies throughout the winter, which actually did involve some shrinking.

From summer to winter, shrew skulls shrunk by 15 percent. X-rays indicated that most of the missing bone was consumed from around joints. Spines got shorter, and even major organs were smaller in January than in June. To round things out, shrews even reduced their brain matter by 20 to 30 percent, a move that’s especially surprising considering how much mammal bodies usually favor preserving brains over other anatomy. Shrews aren’t the only animal to reclaim nutrients from their skeletons, but with the number of mammals that usually plump up in advance of cold weather, this strategy still stands out.

Possible upsides of eating yourself

Reabsorbing nutrients from non-fat tissue is a bit surprising, especially in winters when smaller bodies are more likely to struggle with heat retention. Researchers aren’t sure exactly what advantage put shrews on this evolutionary path, but they speculate that it’s generally a matter of efficiency. Brains, for instance, demand a lot of calories, and in the winter time there’s literally less for a shrew to do and think about. They aren’t looking for mates or raising young, and foraging for small snacks just doesn’t need as robust a body to get by.

In the spring time, shrews start to grow all these tissues back. As the world thaws and starts being filled with more food options again, shrew brains and bones return to the same size they were the previous summer. Of course, as long as mating season is successful, this regrowth doesn’t have to be so perfect- a shrew’s lifespan is only around 14 months long, so they only have put their body through this extreme weight-loss cycle once in lives.