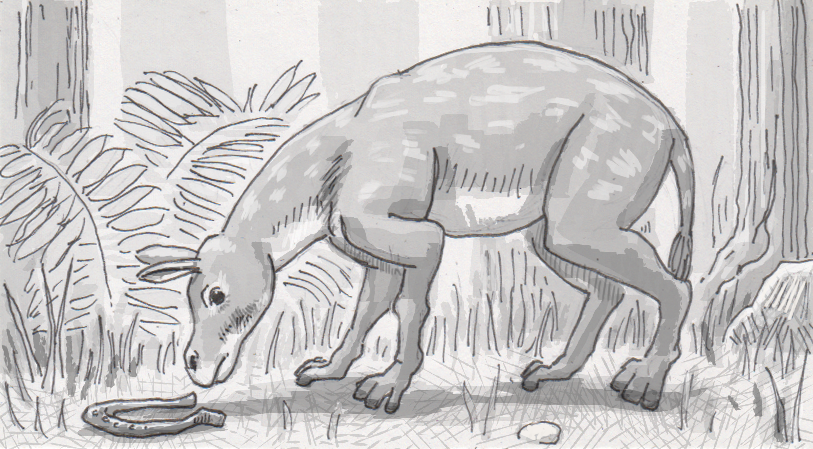 Farriers would have had a much more difficult job 55 million year ago. Making a modern horseshoe isn’t necessarily easy, but the famous “U” shape is a lot simpler than what an ancient horse’s four- and three-toed feet would have needed. Of course, ancient animals like Hyracotherium probably wouldn’t have required a metal shoe in the first place. They were much smaller animals that scurried through tropical forests on feet that looked a lot like your average dog’s, give or take a toe. That obviously changed over time, and while scientists are confident about the course of change that created modern one-toed horses, zebras and donkeys, they’ve had a much harder time understanding how these changes provided much of an advantage over retaining more digits.

Where to put the weight

To dig into potential biomechanical advantages of the modern horse hoof, researchers made detailed scans of fossils and bones to really understand the structure of each species’ legs. More ancient animals, like Hyracotherium, were only 20 pounds. Nonetheless, their weight was distributed over multiple digits on each foot, with each digit ending in a small hoof. This arrangement was similar to a modern tapir, and meant that no single toe had to bear too much stress with each step.

Over time, the central toe took on bigger and bigger role. In Pseudhipparion, a horse ancestor that lived in the Miocene epoch, the middle toe was found to hold up to the stresses of running as much as a foot with every toe pitching in equally.  As species continued to grow larger and larger, the central toe seemed to become more and more robust to handle the load. We sometimes put shoes on horses today, but a healthy hoof, combined with thicker, slightly hollowed leg bones, can handle a lot of stress without a problem.

With a center toe taking so much weight successfully, the other digits on horses foot may have simply become dead weight. Once horses moved out of forests and began specializing in running through open spaces like grassy plains, their legs grew longer and speed became a bigger issue. Extra toes may not seem like a big deal, but if they’re not really being used, they’re essentially just more tissue requiring energy to grow, keep healthy, and move around. With a center digit strong enough to hold their weight, it seems that horses just didn’t gain anything from keeping their other toes, and so evolution purged them over time.

My third grader asked: So all the one-toed animals are horses, zebras and donkeys? Cows and gazelles aren’t related?

This evolutionary path has only been followed by members of Equidae, which is today represented by horses, zebras and donkeys. While cows and gazelles have hard hooves, they are actually more distantly related to horses than tapirs and rhinos. The fact that so few animals have abandoned nearly all of their digits is part of why scientists have been so curious about equids’ unusual feet.

Source: How the horse became the only living animal with a single toe by Nicola Davis, The Guardian