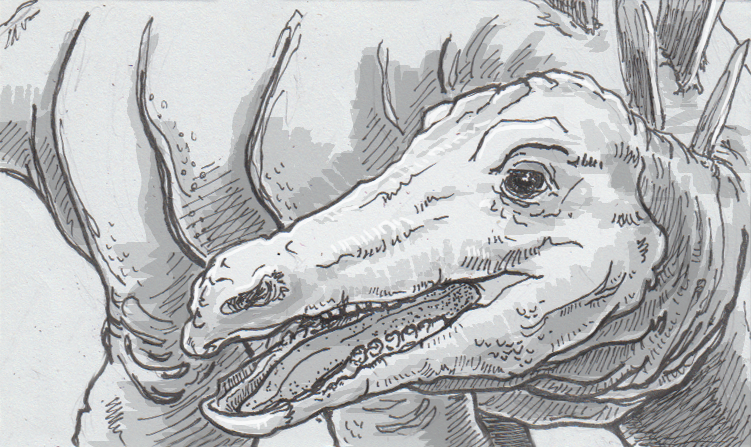 Simulations find surprising strength in the bite of a Stegosaurus

Looking at a skull, scientists can make excellent guesses about an animal’s diet, feeding habits and possibly behavior. The shape and wear marks on teeth, the relative size of nasal cavities and eye sockets, and even patches of bone where muscle was once attached can give you a sense of how that animal made use of their head when alive. When it comes to extinct creatures like dinosaurs, scientists are now packing all this information into computer simulations and using it to calculate the physical abilities a skull could support, such as Tyrannosaurus rex’s powerful, bone-shattering bite. Biomechanical simulations are even uncovering surprises in less dramatic jaws, like the unexpected strength of a Stegosaurus, which is leading us to reconsider assumptions about the 2.6 ton herbivore.

Before your imagination runs wild, nobody is suggesting that the small, peg-shaped teeth of a Stegosaurus were used for anything but plants. The narrow snout and thin jaw are still believed to only be capable of a basic scissoring movement, without the lateral, grinding motions found on later herbivores. Additionally, comparisons to unrelated species with similarly small mouths like Plateosaurus and Erlikosaurus led paleontologists to believe that Stegosaurus was limited to chewing only the most delicate of plants. Since there was no grass in the Jurassic period, Stegosaurs must have focused on soft ferns in their diets.

These assumptions based on eyeballing Stegosaur skulls are proving to be slightly off the mark though. Simulations have found that their skulls could have probably packed a bit more punch into their bites, matching that of a modern cow or sheep. While 40 to 50 pounds of pressure doesn’t sound much compared to what you’d find on a headlining predator, it allows for a significant expansion of a Stegosaurus‘ diet. Beyond soft ferns, the “roof lizard” may have also dined on woodier plants like cycads. This not only means a lot more food would have been available to the large herbivore, but that their role in the ecosystem would be expanded as well. Cycad seeds are contained in pine cone-like pods, and these new calculations mean that Stegosaurus could have consumed and dispersed those seeds, rather than just nibbling leaves.