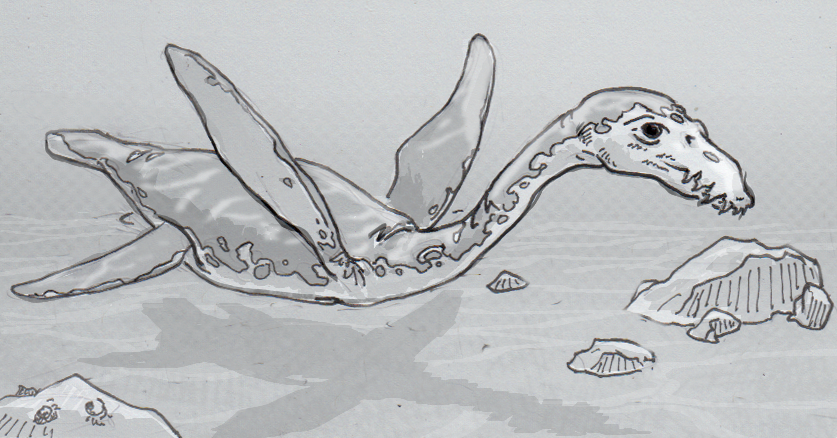 When plesiosaurs were first discovered in 1821 by Mary Anning, they obviously raised a lot of questions. The four-flippered marine reptile was a baffling find, especially considering paleontology hadn’t even gotten around to coining the name “dinosaur” yet. Now, with such taxonomic questions long settled for these Mesozoic mariners, one last question has finally been resolved— how did these creatures actually maneuver through the water?

Shortly after their discovery, scientists noted that the four large flippers on plesiosaurs opened a few possibilities for how they actually swam. Without the strong tails and dominant pectoral fins found on most fish and marine mammals, many of today’s fastest swimmers couldn’t be used as a model. Nonetheless, with plesiosaurs living in the seas from the Triassic through the Cretaceous periods, they had plenty of time to evolve an efficient method of moving through the water, even if we weren’t sure of what it was. The less orthodox swimming models that eventually rose to the top were based around rowing, with all the flippers moving forward and back together, or on penguins, with the front limbs flapping like a bird.

Without being able to build a living marine reptile, researchers as the Georgia Institute of Technology built a digital animal instead. Based off of a remarkably complete skeleton of Meyerasaurus, simulations were run to see which swimming style offered the most efficient movement. The winner was the penguin-stroke, wherein the front limbs provide most of the power, while the rear limbs may have been more useful for steering or rotation. While it might seem like the rear limbs were somehow underutilized in this model, the fastest penguin is able travel up to 22 miles-per-hour, showing how underwater ‘flight’ can be very effective.

Since marine reptiles aren’t in the lineage of aquatic birds like penguins, it helps that sea turtles, as fellow reptiles, also use a sort of vertical flapping motion to move through the oceans. The maneuverability offered by the plesiosaur’s rear limbs may hint at movements from another relative, the crocodile. Crocodiles feed with twisting, torquing motions while clutching their food in their mouths. While the rear flippers on a plesiosaur weren’t likely pushing them forward, they may have instead helped these hunters corkscrew through the water.