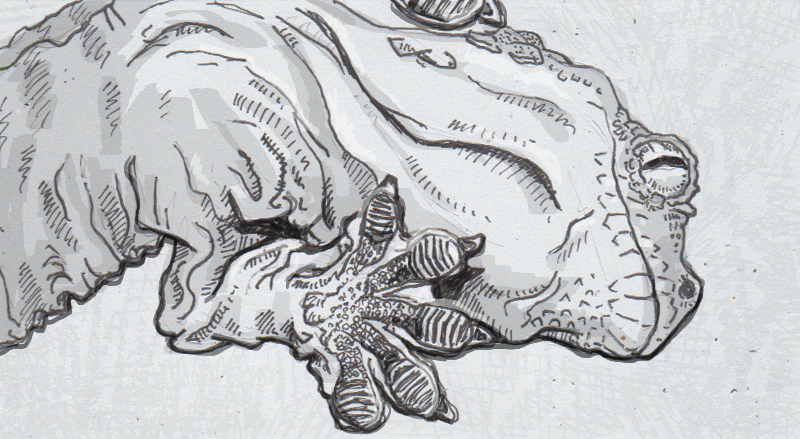 The largest gecko alive today is the New Caledonian Giant Gecko (Rhacodactylus leachianus), who weighs in at a massive…. eight-tenths of a pound. The 8- to 14-inch reptiles are even considered to be examples of island gigantism, as they face less competition in their ecosystem, allowing them to grow larger than most other gecko species in the world. However, even if free mouse and cricket buffets were opened for the “leachie” lizards, they probably wouldn’t want to get any bigger, because if they did, they’d start falling a lot more often.

That prediction is thanks to a study over 225 climbing animals from Cambridge University, which found that body weight is a big limitation on sticky climbers, like geckos. While geckos are amazing climbers, whose specialized foot-pads allow them to hang from nearly any surface, their adhesion-based climbing can only support so much weight. This tension was found for a variety of animals, ranging from spiders to frogs, where a maximum weight-to-surface area ratio had to be maintained, no matter the details of that specific animal’s adhesion.

These ratios can’t be maintained in larger animals because mass doesn’t increase at the same rate as volume. As a body gets larger, its weight increases at a faster rate than the amount of skin it takes to cover it. For climbing, that means that the amount of weight each finger or two needs to support gets to be too much, and stickiness can’t keep pace for larger bodies. This is why big climbing animals, like cats, need to rely on very different biomechanical arrangements, like claws. The alternative for a human-sized animal would be to have size 114 feet, which would of course be difficult to even walk with.

This news is a bit of a setback for engineers, who were hoping to imitate the extreme-cling of a gecko in industrial processes. The concept of adhesion-based climbing is very compelling, supported by the number of wildly different species that have evolved to depend on it. In many cases, the adhesion was the result of convergent evolution— rather than inheriting from a single shared ancestor, the trait, multi-generational trial and error has returned to this ‘solution’ repeatedly. With an evolutionary endorsement like that, it was an attractive target for some biomimicry. The next option is then to aim for stronger adhesives, or some way to maneuver with appropriately-scaled giant toes.