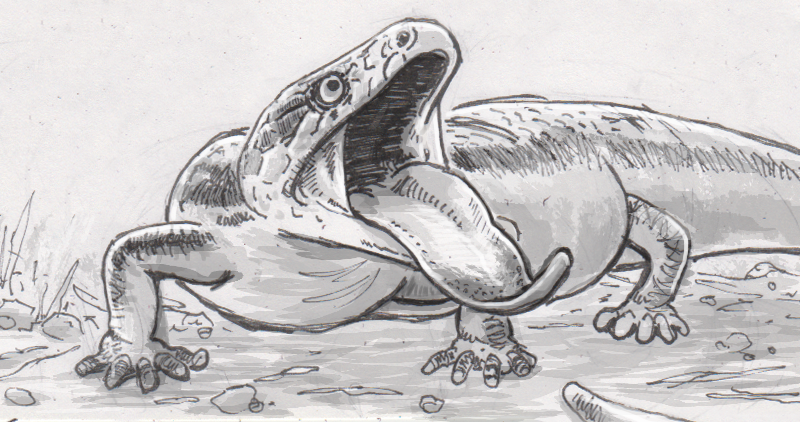 Skinks use blue tails and tongues to trick attacking predators

Green means “go,” red means “stop,” and blue apparently means “don’t eat me,” at least if you’re a lizard. Don’t feel bad if you’ve somehow never noticed this message in all the lizards you thought about eating, because the blue in question is primarily in the ultraviolet (UV) light spectrum, which human eyes can’t see. Predators of bluetongued skinks and Plestiodon latiscutatus are very likely to notice this bright color though, which the lizards have come to rely on as a way to stay safe.

Bewildering tongues in ultraviolet and blue

As their name implies, bluetongued skinks like Tiliqua scincoides intermedia focus their predator-deterring coloring on their tongues. Of course, this means that the blue isn’t visible at all times, which allows the lizards to utilize it only when necessary. Most of the time, the brown, banded coloration on these lizards works to camouflage them among the dirt, rocks and foliage of northern Australia where they live, as the easiest way to deal with predators is to avoid interacting with them at all. If the lizard is spotted though, it will wait until nearly the last second before being struck down to open its mouth wide and reveal its intensely-colored tongue, which is visibly blue to humans at the tip, but more saturated in ultraviolet color towards the back of the mouth.

When coupled with some good hissing and puffed-up body language, this display has a chance to startle a predator enough to stop their attack. In tests with dummy predators, it appeared the the skink did make some judgment about the severity of the incoming attack, reacting more for a fake snake than for a piece of wood moving in their direction.  The lizards also made sure to time their big reveal carefully, since revealing a bright tongue from a distance would just make them easier to target. By waiting until the last second, particularly for a diving bird, the skink would have the best chance to significantly disrupt an attack, buying itself time to escape. This strategy also indicates that predators wouldn’t be deterred simply by the bright color, suggesting that the element of surprise is the key mechanic at play, versus the warning of potential poisoning behind the coloring of a poison dart frog in the Dendrobatidae family.

Not every lizard hides it’s ultraviolet side though. Many species of lizard, particularly young skinks, start their lives with bright blue tails. Unlike the bluetongued skinks, these bright tails are meant to draw predators’ attention, allowing the lizards to use autotomy to escape serious harm. As long as predator only strikes the blue portion of the lizard’s tail, that bit of flesh can be safely detached to spare the target’s life.

With no way to hide and reveal these tails, lizards seem to have tailored exactly how eye-catching they are according to the threats in their local ecosystem. If lizards face snakes and weasels, tails are likely to be colored in blue and UV-reflecting pigments. If a snake is the only predator to worry about, the lizards’ tails are only distracting in ultraviolet, allowing them to draw a little less attention to themselves in other color spectra. Birds almost reverse this trend, since their ability to spot a lizard tail from a distance makes drawing their attention more trouble than it’s worth. So when lizards need to worry most about predatory birds, they’re most likely to skip blue and UV colors altogether, opting for more easily hidden tails and bodies.