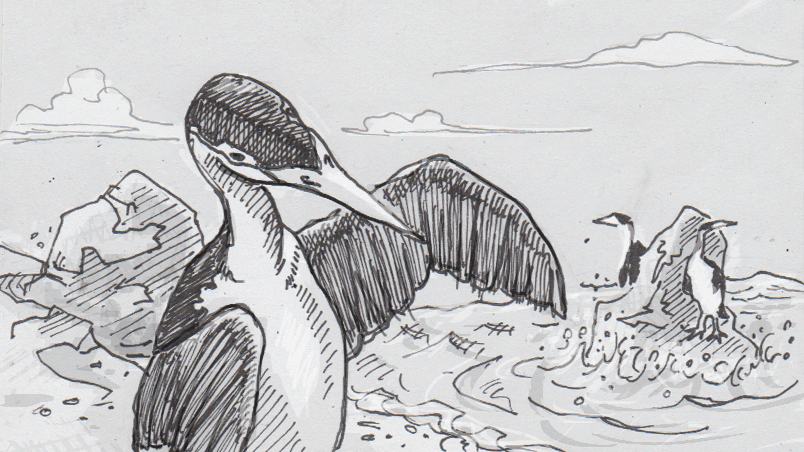 Skulls show what penguins sacrificed to specialize in swimming

Oh, to fly through the wild blue yonder. Humans often dream of taking to the sky, but according to the fossil record returning to the sea is a more popular notion. While ancestors of whales gave up living on land, birds like penguins seem to have given up flight to become stronger swimmers. Actually, scans of fossilized penguin skulls show that neurologically, they never gave up soaring with their wings, they just changed what environment they were moving through.

Giving up flight for swimming was obviously an involved process. Some modern birds, like Murres (Uria aalge) seem to still be in the middle of that transition today. These birds demonstrate some of the trade-offs necessary to move to the ocean, particularly with wing shapes. At this point, their wings allow them to fly and swim, but they’re much more efficient in the water than in the air.

While penguins obviously ended up specializing in aquatics over aeronautics, there was more to that commitment than just shifting wings to flippers, and flight feathers to oily insulators. Scans of fossilized skulls reveal that even 30 million years after they gave up flying, their brains were still prioritizing different structures to better match hunting in the water. For example, olfactory bulbs gradually shrank, while visual centers became enlarged. Swim-friendly adjustments were also seen in the inner-ear, perhaps to improve the birds’ sense of underwater equilibrium.

These specializations don’t mean that penguins are hardly comparable to modern flying birds though. Some of these same evolutionary paths have been followed in flying birds as well. Flying and swimming seem to make some of the same demands on the brain, leading to some convergent solutions in birds’ brains.