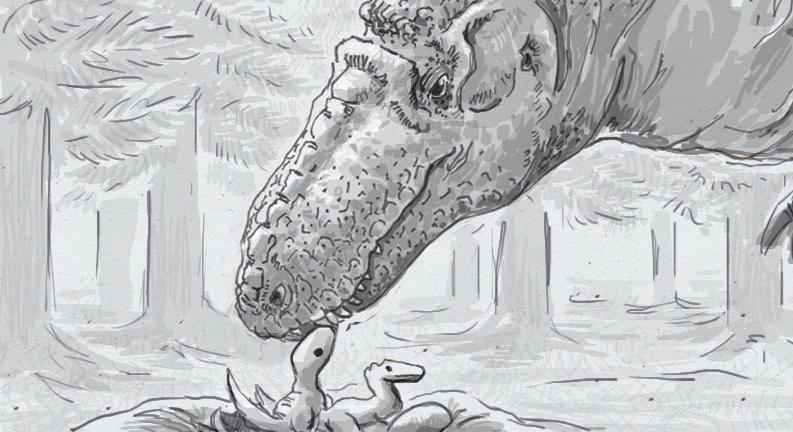 A newly named tyrannosaur called Daspletosaurus horneri is a bit of a sensation among paleontologists thanks to marks on its skull that suggest it had something akin to whiskers all over its nose and mouth. Before the feather-fearing crowd freaks out, the term “whiskers” is being used to describe function more than form here. The structures in question most closely resemble the sensory organs found all over a crocodile’s face, and while the exact sensitivity of D. horneri face is still up for debate, there’s less doubt that it’s snout was covered in large, crocodillian scales. Oh, and there were horns too, although nothing pointy enough to stop this theropod from snuggling if it felt like it.

Feeling everything with their face

If a sensitive crocodile sporting non-whiskers seems like a weird reference point, it’s probably because it’s so easy to overlook Integumentary Sensory Organs (ISOs) on a crocodile. They’re in plain view if you look at something like a Nile crocodile or spectacled caiman, but instead of long, hair like filaments you can only see tiny raised dots within the border of each larger scale. These dots might just seem like raised bits of color for camouflage patterning or maybe ubiquitous blackhead pimples, but ISOs enable crocodiles to have extremely sensitive sense of touch all over their heads, comparable to your fingertips. They can use this sensitivity like radar, feeling small vibrations made by prey in water too murky to see through. Or they can use it to help check the temperature of potential nesting sites, and later delicately handle their hatching eggs and offspring in their mouths.

Assuming D. horneri did have a snout covered in ISOs, it’s easy to see how similar behaviors would could have been useful to the Cretaceous period predator. They probably weren’t hunting in water, but sensing temperature and subtle, tactile information could have helped with assessing carcasses to scavenge, changes in wind direction, or the state of struggling prey. It would have also helped with nesting preparations similar to crocodiles, as well as bonding with mates, since there’s a decent chance that these ancient theropods pair-bonded as much as birds do today.

Clues about the skin seen in the skull

That’s a lot to extrapolate from a few skulls, of course. The evidence that tyrannosaurs even had ISOs isn’t conclusive, but the studied skulls do show signs that bone growth in the face was similar to that of modern crocodiles, which causes the large scales to form as the skin tries to keep pace with expanding bone. The ISOs are then suspected because small holes were found that would be appropriate for blood vessels and nerves to pass through, once again in a similar fashion to modern crocodiles. Finally, these potentially-sensitive scales appear to have grown very close to the tyrannosaur’s gum line, leaving no space for lips, just like… a crocodile.

This might seem like researchers are painting D. horneri as a 30-foot-long, bipedal crocodile, but crocodile’s don’t have a monopoly on sensitive face structures. The tiny ISOs in question may be tied to crocodiles, but the underlying nerve bundle that takes all this sensory information to the brain is widespread among many types of animals. Called the trigeminal nerve, this structure is rather large in crocodiles, but even humans make use of the same fundamental anatomy to feel pressure on our cheeks and facial hair. As hinted earlier, mammalian whiskers, electroreception in platypus bills, magnetic sensitivity in birds and even heat detection in snakes all rely on this anatomical infrastructure. With that in mind, D. horneri’s face may not only help us better understand tyrannosaurs, but also how these abilities and anatomy evolved in animals as a whole.