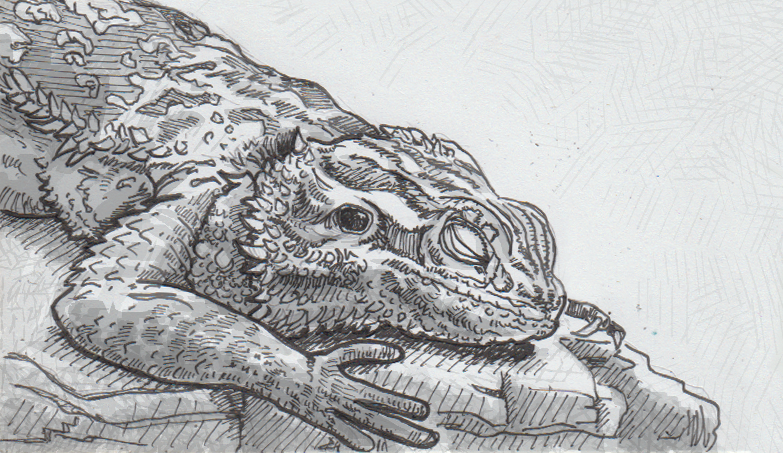 Who was the first animal to dream? It may seem odd, but there’s evidence that dreaming evolved at some point, because while all animals with a brain sleep, many show no signs of specific phases of sleep, like rapid eye movement (REM) when we dream. Pinning down when this layer of complexity evolved just became a bit clearer, as sleep phases have been found in Australian dragons, pushing back the age of dreams to a much more logical starting point.

Sleep phases are essentially labels for different patterns of brain activity we can observe when an animal sleeps. Humans’ large brains seem to operate with five stages of sleep, with two of the key phases being REM and slow-wave sleep. These two phases have been seen in mammals and birds, which was strange because the last common ancestor mammals shared with birds was also shared by reptiles, pterosaurs and every other non-amphibian tetrapod. But with no matching sleep patterns detected in modern reptiles, these two phases would have either have had to evolve separately in birds and mammals (possibly tied to being warm blooded,) or been discarded by reptiles at some point. Both scenarios are possible, but some inadvertent data from some sleeping lizards now gives us a much simpler timeline.

Researchers at the Max Planck Institute for Brain Research in Germany were looking at brain activity in Australian dragons (Pogona vitticeps). They had been monitoring the lizards’ brains while studying their cortices, and decided to continue recording data overnight. Unexpectedly, they found telltale patterns of two sleep phases, with higher and lower amounts of brain activity, akin to REM and slow-wave sleep. The lizards aren’t a perfect match for what’s seen in mammals, as their sleep cycles alternate every one to two minutes equally, versus the increasing amount of slow-wave sleep seen in our brains as a night’s rest progresses. It’s hard to say if the dragons were necessarily dreaming in the way we know it, but at they very least they do show similar amounts of neural activity in their REM state. The researchers assume that they detected this previously unseen activity thanks to more sophisticated monitoring techniques that hadn’t been available in previous studies of reptile sleep.

What demanded that our ancestors dreamed?

Assuming Australian dragons aren’t a (increasingly unlikely) third case of convergent evolution in the evolution of sleep phases, this suggests that REM and slow-wave sleep first appeared with that early, amniote ancestor. It’s also raised the possibility that multi-phased sleep is actually even older, starting with tetrapods, which would be confirmed if anyone can observe amphibian brains showing similar activity. At a minimum, it reshapes some questions about why this activity would evolve in the first place, which are further complicated by one more difference in how the reptiles slept. Rather than originating from the hippocampus as observed in mammals, slow-wave sleep in the Australian dragons started from their dorsal ventricular ridge, a structure mammals don’t even posses. So while this discovery cleans up the origin of sleep phases to a degree, anyone who thinks we’ve got the whole story figured out is clearly dreaming. (couldn’t resist- sorry!)